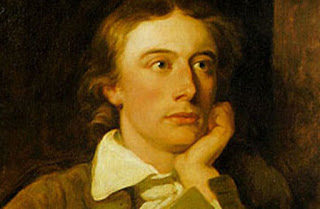 John Keats was born on October 31, 1795. He attended a private school at Enfield as a boy, where he was befriended by a young schoolmaster named Charles Cowden Clarke, who encouraged his interest in literature. His father died when he was eight and his mother when he was fifteen. At sixteen his guardian apprenticed him to an apothecary-surgeon and in 1815 he enrolled in medical school.

He continued his friendship with Clarke who introduced him to Leigh Hunt, who in turn introduced him to Shelley, Lamb, and Hazlitt. His first sonnet, On First Looking into Chapman's Homer, was published in 1816 and received an enthusiastic response. Deciding to devote his life to poetry, he left the medical profession and published some early poems in a volume called Poems, in 1817 and began writing his poetic romance, Endymion. Endymion was published in 1818 to critical reviews.

Over the next two years he produced all of his greatest poems - La Belle Dame Sans Merci, Ode on a Grecian Urn, Ode to a Nightingale, The Eve of St. Agnes, and others.

He was diagnosed with tuberculosis and was advised by his doctors to move to a warmer climate. In September 1820 Keats sailed to Italy with his friend Joseph Severn and died in Rome in February 1824. His body was buried in the Protestant Cemetery in Rome.

Below are a few of my favourite Keats poems:


Lines on the Mermaid Tavern

Souls of Poets dead and gone,
What Elysium have ye known,
Happy field or mossy cavern,
Choicer than the Mermaid Tavern?
Have ye tippled drink more fine
Than mine host's Canary wine?
Or are fruits of Paradise
Sweeter than those dainty pies
Of venison? O generous food!
Drest as though bold Robin Hood
Would, with his maid Marian,
Sup and bowse from horn and can.

I have heard that on a day
Mine host's sign-board flew away,
Nobody knew whither, till
An astrologer's old quill
To a sheepskin gave the story,
Said he saw you in your glory,
Underneath a new old sign
Sipping beverage divine,
And pledging with contented smack
The Mermaid in the Zodiac.

Souls of Poets dead and gone,
What Elysium have ye known,
Happy field or mossy cavern,
Choicer than the Mermaid Tavern?

No, no, go not to Lethe, neither twist
Wolf's-bane, tight-rooted, for its poisonous wine;
Nor suffer thy pale forehead to be kiss'd
By nightshade, ruby grape of Proserpine;
Make not your rosary of yew-berries,
Nor let the beetle, nor the death-moth be
Your mournful Psyche, nor the downy owl
A partner in your sorrow's mysteries;
For shade to shade will come too drowsily,
And drown the wakeful anguish of the soul.

But when the melancholy fit shall fall
Sudden from heaven like a weeping cloud,
That fosters the droop-headed flowers all,
And hides the green hill in an April shroud;
Then glut thy sorrow on a morning rose,
Or on the rainbow of the salt sand-wave,
Or on the wealth of globed peonies;
Or if thy mistress some rich anger shows
, Emprison her soft hand, and let her rave,
And feed deep, deep upon her peerless eyes.

She dwells with Beauty - Beauty that must die;
And Joy, whose hand is ever at his lips
Bidding adieu; and aching Pleasure nigh,
Turning to poison while the bee-mouth sips:
Ay, in the very temple of Delight
Veil'd Melancholy has her sovran shrine,
Though seen of none save him whose strenuous tongue
Can burst Joy's grape against his palate fine;
His soul shall taste the sadness of her might,
And be among her cloudy trophies hung.


When I Have Fears That I May Cease to Be

When I have fears that I may cease to be
Before my pen has glean'd my teeming brain,
Before high-piled books, in charactery,
Hold like rich garners the full ripen'd grain;
When I behold, upon the night's starr'd face,
Huge cloudy symbols of a high romance,
And think that I may never live to trace
Their shadows, with the magic hand of chance;
And when I feel, fair creature of an hour,
That I shall never look upon thee more,
Never have relish in the faery power
Of unreflecting love;--then on the shore
Of the wide world I stand alone, and think
Till love and fame to nothingness do sink.
Posted by C R Ward at 8:00 AM

'fair creature of an hour', is this a euphemism for prostitute???

See my fb page for Ode to a Grecian Urn - we studied it in Sr High English and I LOVED IT lol.