Still waiting on the cover art for the covers of the OTF project, but for all intents and purposes the project is done. And just so you know that I haven't just been slacking off for the last eight months, I have the pictures to prove it.

I don't know how well you can see this, but this shows that even when printing black and white pictures my printer insisted on adding blue . . . unless I switched from printing in colour to printing in greyscale. 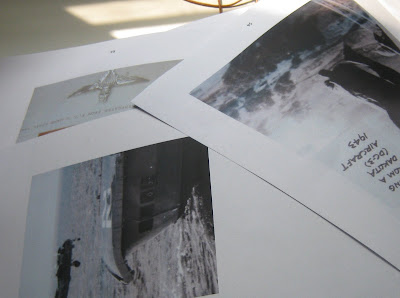 This is a picture of the finished project 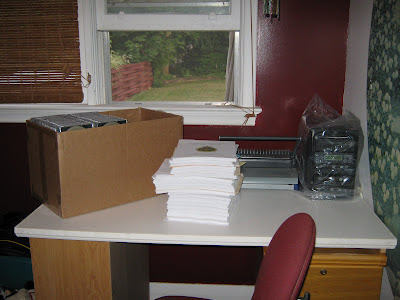 The project consists of:
32 interviews between veterans and local high school students
19 hours of recordings (edited down from 26 hours)
877 hours of audio editing/mastering (hubby did this part over 20 months)
224 hours of transcribing interviews
over 190,000 words transcribed; 475 pages split into 3 volumes

And this is a picture of the amount of shredding I have to do. It was really tempting to do all the shredding myself and then take a picture of all the bags stacked up, however the last time I had a pile of shredding to do (a much smaller pile) it took forever and I burned out one of my shredders (I had two). This time I'm shoving everything into a box and then taking it to my husband's office to add to their pile of shredding. Every once in awhile a truck comes and pretty much shreds everything in a manner of minutes. Apparently it acts something like a wood chipper. :-) 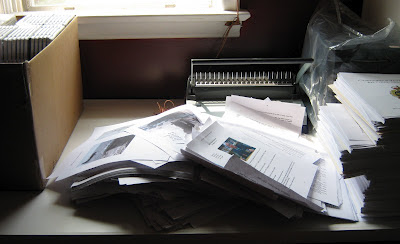 Got my serial posts both written and up on time, as well as my book review and poetry post. Go me! LOL I even updated my Goodreads and my Reading Challenge page. I did not get a Flash Fiction posted, however, nor did I make it to the poetry reading (not feeling well)

Did you participate in the poll I put up Tuesday? Too late, poll is closed now. Blogger wouldn't allow me to add choices to their poll (their maximum was four and I had six) so I had to put two polls into the sidebar. I can't believe it - the cheese won! So this week will be the first installment of cheeses of the world. *shakes head sadly*

My weekend did not go as planned. While I did spend some time outside on Saturday, it was at a great-nephew's first birthday party. Granted he's a cute little gomer, but I find a little bit of kiddie time goes a long way. Then Sunday I was at a bridal shower for my husband's cousin's son's future bride. I'm not even sure why I was invited. It was a very elegant affair though.

Hopefully this will be it for this kind of thing for a while. It's not that I mind doing family stuff so much, it's just that it's always smack dab in the middle of the day. And . . . I spoke too soon. Next weekend is my father-in-law's birthday so I expect there'll be a get-together for that as well. *sigh*

I pulled out one of my almost finished manuscripts between parties on the weekend and got a little bit of work done on it. This week I'd like to get a bunch more work done on it. My work room isn't looking too bad, but my office is in sad shape . . . again. I'm hopeful it won't take too long to whip it into shape again because I think I'll get more accomplished if I work in there than in the easy chair in the living room.

What’s Up This Week: The schedule is up on the side bar, so I’m just giving the highlights here.

Tuesday On Random Thoughts I will be posting my first installment of Cheeses of the World. On Random Writings I will be doing a book review - hopefully of a book I've just finished reading.

Wednesday (on Random Writings) Chapter Sixty-one of Shades of Errol Flynn. I think it's time to check in on Howard and the wizards, don't you? On Random Thoughts there’ll be a hunk and a day hussy for your viewing pleasure. ;-)

Thursday we have Chapter Twenty-six of Water (on Random Thoughts) where I think we'll see how Nereida is doing . . . maybe.

Friday I've run out of poetry from the PAD challenge, so on Random Writings I might have to come up with a fresh poem. I've actually had a couple of flash fiction ideas rattling around in my head, so perhaps I will get one written for Random Thoughts this week.