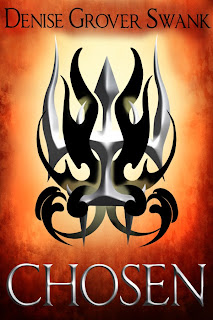 Everything Emma Thompson owns fits in a suitcase she moves from one roach infested motel to another. She and Jake, her five year old son who can see the future, are running from the men intent on taking him. Emma will do anything to protect him even when it means accepting the help of a stranger named Will. Jake insists she needs Will, but Emma's never needed help before. And even though she's learned to trust her son, it doesn't mean she trusts Will.

Mercenary Will Davenport lives in the moment. Hauling Emma to South Dakota should have been an easy job, but his employer neglected to tell him about Emma's freaky son and the gunmen hot on her trail. Instinct tells him this job is trouble, but nothing can prepare him for Jake's proclamation that Will is The Chosen One, who must protect Emma from the men hunting her power. A power she doesn't know she has.

Will protects Emma and Jake on a cross-country chase from the men pursuing them, while struggling with memories from his past, his apprehension of Jake, and his growing attraction to Emma. Will's overwhelming urge to protect Emma surprises him, especially since it has nothing to do with his paycheck and possibly everything to do with the tattoo Jake branded on his arm. Rich and powerful men are desperate to capture Emma, and Will must discover why before it's too late.


I almost wondered if I was missing the first couple of pages of this book (I read it on my Kindle) because we jumped right into the action. I was left with a lot of questions: who were these men after Emma and her son; why were they after her; who was this mysterious stranger who practically bullied his way into helping them? Well guess what, Emma didn't know the answers either, and it made it very hard to put the book down as we slowly started to figure out what was going on together.

It's fast paced and action packed. I loved Emma - her determination, her grit, her willingness to do whatever it took to save her son. Will took a little longer to like. We knew he had a hidden agenda and some issues of his own to work out, but I had faith in his character and hoped he'd do the right thing.

The story itself is like a roller coaster - full of twists and turns, ups and downs, barely allowing you to catch your breath before it's full speed ahead again. It will leave you breathless . . . and wanting more.

I've also read Twenty-eight and a Half Wishes, by this author and I loved it. Chosen is nothing like it. That's not to say I didn't love it as well, it's just very different and shows the versatility of the writer.

I can't wait to find out what happens next in this series - thank God two of them are available now and the fourth will be available in October. Chosen, and it's sequels, Hunted and Sacrifice, are available on-line everywhere. They're a bargain at $2.99 each for the e-version. Here's the link for Amazon.

Fantastic article, it’s very comprehensive and exciting! it’s so helpful to me, and your weblog is very good. I am definitely going to share this URL with my friends. Just bookmarked this site.