Gifts of the Crow
by John Marzluff and Tony Angell 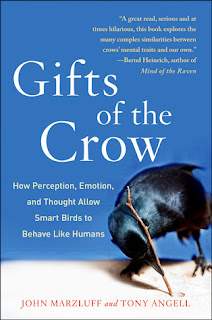 CROWS ARE MISCHIEVOUS, playful, social, and passionate. They have brains that are huge for their body size and exhibit an avian kind of eloquence. They mate for life and associate with relatives and neighbors for years. And because they often live near people—in our gardens, parks, and cities—they are also keenly aware of our peculiarities, staying away from and even scolding anyone who threatens or harms them and quickly learning to recognize and approach those who care for and feed them, even giving them numerous, oddly touching gifts in return.

With his extraordinary research on the intelligence and startling abilities of corvids—crows, ravens, and jays—scientist John Marzluff teams up with artist-naturalist Tony Angell to tell amazing stories of these brilliant birds in Gifts of the Crow. With narrative, diagrams, and gorgeous line drawings, they offer an in-depth look at these complex creatures and our shared behaviors. The ongoing connection between humans and crows—a cultural coevolution—has shaped both species for millions of years. And the characteristics of crows that allow this symbiotic relationship are language, delinquency, frolic, passion, wrath, risk-taking, and awareness—seven traits that humans find strangely familiar. Crows gather around their dead, warn of impending doom, recognize people, commit murder of other crows, lure fish and birds to their death, swill coffee, drink beer, turn on lights to stay warm, design and use tools, use cars as nutcrackers, windsurf and sled to play, and work in tandem to spray soft cheese out of a can. Their marvelous brains allow them to think, plan, and reconsider their actions.

With its abundance of funny, awe-inspiring, and poignant stories, Gifts of the Crow portrays creatures who are nothing short of amazing. A testament to years of painstaking research and careful observation, this fully illustrated, riveting work is a thrilling look at one of nature’s most wondrous creatures.


Written by John Marzluff and Tony Angell and beautifully illustrated by Tony Angell, Gifts of the Crow is a must have for any bird lover.

I don't normally read a lot of non-fiction, but I was happy to make an exception for this book. I knew crows were smart, but I never realized just how truly intelligent they really are. Right from the beginning, in the very the first chapter, we're given an example of a crow who learned to make and use a tool to retrieve food. I had no idea they could do things like that!

I have a family of four crows that I leave peanuts out for, and I love to watch them as they swoop in to take the peanuts off the deck railing. They can usually fit two in their beaks at the same time, and I've watched when a peanut is too big for them and they smash it against the railing to flatten it enough so that they can make both shells fit.

The science was a little heavy handed for someone like me (who's not very scientifically inclined) but for anyone who does have a more scientific bent, I'm sure they would find it quite interesting indeed. That being said, there were certain aspects of the science behind the crow's intelligence that I found fascinating, such as the comparison of the crow's brain to a filament style light bulb and the neurobiology of play.

What I loved most about this book were the experiments testing the crow's intelligence and the anecdotes and stories, especially the stories of the crows interacting with other animals. I learned a lot about my crow buddies and I would highly recommend this book to anyone who's ever been fascinated by crows or even the intelligence of birds.

You can buy your own copy of Gifts of the Crow from Amazon, or from your local bricks and mortar bookstore.