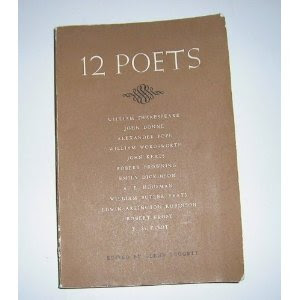 If you're a regular on this blog, then you know I'm a poet as well as a writer and editor. And while I don't read a great deal of poetry, when I do it's usually the more classical poets. The twelve poets in this volume are: William Shakespeare, John Donne, Alexander Pope, William Wordsworth, John Keats, Robert Browning, Emily Dickinson, A.F. Housman, William Butler Yeats, Edwin Arlington Robinson, Robert Frost, and T.S. Eliot.

This is an older book, published in 1958. I have to admit I don't read much modern poetry, a lot of it doesn't feel like real poetry to me. While I was familiar with most of the poets, I was also introduced to two new ones: A.F. Housman and Edwin Arlington Robinson.

The volume contained many old familiar favourite poems, like Shakespeare's Sonnets, but there were many new poems as well, and that's always a pleasure. My favourites were Porphyria's Lover, by Robert Browning and La Belle Dame Sans Mercy, by John Keats. Of course I loved almost all of the selected poems by Keats.

One of the nice things about this book was the biographical information at the beginning of each section, usually at least a page worth. This was a great book of poetry and I would highly recommend it to anyone who enjoys a good poem.

You can buy a used copy of this book at Amazon or borrow it from the Lending Library.