Wow, it's been a long time since I've participated in a blog chain. I've forgotten how much fun they can be! This month's prompt, Otherworldy, was irresistible.

Ghouls, ghost and things that go bump in the night. Old Hallows Eve, Dia de los Muertos and Halloween. October is the month where the veil between our world and the Other thins. So this month is about those things beyond our world, be they scary, funny or anything in between.

Once you've finished reading my story, check out the links to the other participants and show them some love by leaving a comment. 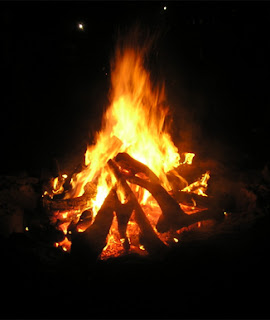 Meriwen looked to the ring of standing stones high on the tor where tongues of flame licked upwards into the night sky. The fire of bone and wood was a beacon in the darkness; everyone in the village had contributed to it. Her family had given a sheaf of wheat and the bones from the pig they slaughtered last week. The meat would see them through at least part of the winter; the bones would help protect everyone from the spirits this night.

Over her arm she carried a small basket with a carved gourd in it to carry an ember from the bone fire home with her to light the hearth fire for a year's good luck. It would also protect her from any remaining evil lurking about as she carried it home. Only one from each family was allowed at the sacred fire. This year it was her turn. Her parents and siblings stayed huddled together in their dark cottage, doors and windows barred fast against the wraiths of Samhain Eve.

She shivered in the cold night air and quickened her steps, eager to take her place. Light from the fire, seeping out from the spaces between the stones, lit the path so she didn't stumble. Slightly out of breath, she shouldered her way in between two other girls and dropped her basket at her feet so she could join hands with them.

"You're late, Meri," the girl on her left hissed.

"Look, she wasn't the only one who was late," the girl on her right nodded to the other side of the ring where Finn was taking his place with the men.

"It's naught but a coincidence, Brenna," Meriwen protested, her flushed face telling a different story. The girls on either side of her exchanged knowing glances and giggled but the time for teasing was over.

"The circle is complete," intoned the priest. "Let us begin."

"This Samhain Eve we stand in a circle around the fire of bones to honour thee Annu and thee Maccha and thee Babd Catha and receive thy blessings."

"This Samhain Eve we stand in a circle around the fire of bones to honour our ancestors, we stand at the border to welcome thee and receive thy wisdom."

"This Samhain Eve we stand in a circle around the fire of bones to make offering to those of the dark so they will trouble us no more."

"Blessed be those who remember the Way and honour to those who have gone before. Let this fire burn bright with the Light, banishing the Dark."

The priest made a gesture towards the fire, or perhaps he threw something into it, and the fire flared before dying again. Now came the tedious part, the chanting and the presenting of the offerings before the fire died down. Meriwen's mind wandered back to her meeting with Finn behind the smithy.

A smile flickered across her face. Finn had put on muscle since his apprenticeship with the blacksmith, the arms he'd held her with were strong and sure. Who knows where it might have led had not Cathal, her foster brother, found them. Finn had slipped away, leaving her to face Cathal's wrath alone, and he'd better not think she'd be ignoring that.

Her smile faded as she remembered Cathal's lecture.

"Gods only know why you were picked for the Samhain ceremony," he told her. "Ye'd best mend your light-skirt ways lest you come to a bad end."

"Is that what happened to Aislinn?" she shot back, and immediately regretted it. Aislinn had been Cathal's betrothed, who disappeared three years ago on Samhain Eve. Rumours had it she'd been taken by spirits while waiting for Cathal. Her body had been found the next day by the river, not a mark on it.

"I wash my hands of ye," Cathal said then, and strode away.

Meriwen sighed. There'd be a fence to mend with her foster brother.

"Let the door between worlds be sealed once more."

With a start Meriwen realized the ceremony was over. As she lined up with the others to receive her coal from the fire, she looked for Finn. There, by the keystone. She tossed her hair to get his attention and smiled coyly when he looked her way. He grinned in return.

She shook her head. "You go ahead Brenna, I've a stone in my shoe."

The other girl was not a fool, but she just rolled her eyes then turned to join her friends who preferred the safety of a group for walking home.

Meriwen lingered, sure that Finn would seek her out. Maybe they could even finish what they'd started earlier. But unbeknownst to her, Finn had been invited to share a cup of ale with his friends and left without so much as a backward glance.

Everyone was gone. The fire was all but out. Meriwen shivered in the frosty night, filled with uneasiness. This was Samhain eve, after all, when the door between this world and the next was open. The air was filled with spirits both sainly and unsainly.

She needed to get home. She should never have stayed so long, waiting for Finn. Obviously he didn't care for her the way she did for him. Better to have learned that now before things went too far between them.

Perhaps if her eyes had not been clouded with tears she would have seen the root that stuck up from the path. Meriwen tripped and fell, twisting her ankle, the basket tumbling a few feet away, dislodging the gourd with its bone fire coal.

"No!" she gasped. The pain in her in ankle was nothing compared to the fear of losing the protective ember. She scrabbled for the gourd but it was too late. The small coal had rolled out of the gourd and into the wet grass.

Meriwen sobbed in fear. She tried to remember the Samhain prayer her mother taught her but her mind was blank with fear. Her ankle throbbed. All she could do was huddle down as small as possible and pray the dawn came quickly.

A shiver passed over her as her small spark of human warmth attracted a brace of wraiths. She could feel them surround her, their eyes upon her. One of them darted closer, a ragged black creature whose eyes burned in an inhuman face. Meriwen shrank back and opened her mouth to scream, but the creature stole her voice. The others circled three times widdershins before diving in to feast upon her soul.

The villagers found her the next morning when they came to the stone circle to collect the ashes from the sacred fire to spread on the fields to ensure a good harvest the following year. She was lying peacefully in the center of the ring of stones. Quite dead. No mark upon her but a look of horror on her face.

But for the mind lingers to a place where the soul departs. This was not the stone that protected them, but a girl's sacrificed.

Would be a good campfire story,

A very engaging read! This story was set up so perfectly that the interjection of the priest and ceremony were so natural. I'm not easily convinced with ceremonies, so I was pleasantly surprised.

Cool story! Meri should have learned from what happened to Aislinn.

Appropriately spooky and Halloweeny! I felt for the poor girl, but if she had to die imaginarily for you to be able to use the word "widdershins" it was not in vain :)