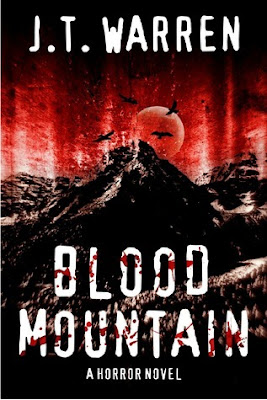 Mercy Higgins is a recent college graduate who isn’t very experienced. Following the death of her mother to cancer, her father brings her on a hike for a needed respite.

Victor Dolor has been secretly watching Mercy. Consumed with the certainty that the End of Everything is fast approaching and he must help “cleanse” the world for the coming Dark Time, Victor pursues Mercy for one purpose.

Up high on Blood Mountain, Victor brutally rapes and assaults her.

But that is only the beginning of the nightmare for Mercy. When her father is attacked as well, she is left alone to fight for herself.

And Victor isn’t the only danger waiting in the woods.


On Blood Mountain, the path to survival can get very gruesome.


I don't generally read a lot of horror and I'm not even sure I knew this book was categorized as horror when I started reading it (I read it on my Kindle and didn't really look at the cover). But I found it hard to put down, nonetheless.

Of course it was the characters that caught my attention, but it was the story that kept me going. That's not to say it was an easy read, it was in fact very disturbing in places, but it was well written.

I found the slow transformation of Mercy from victim to something else fascinating, as I did the insights into the workings of Victor's mind. And I was taken completely off guard by the alliances Victor formed. It was one of those books where the closer to the end I got, the faster I read. This wasn't a romance novel where a happy ending was guaranteed, and I honestly never knew which direction the end was going to take.

If this book had been a movie I would have been jumping in my seat with the rest of the audience at some of the sudden shocks. I highly recommend this book to anyone who's a fan of horror, or even slightly gory suspense.

You can find your own copy of Blood Mountain on Amazon for a mere $2.99.