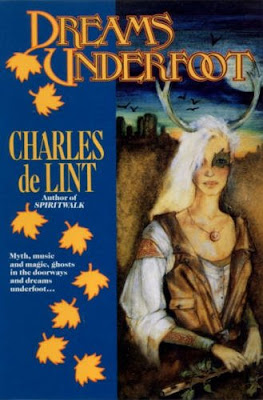 Welcome to the music clubs, the waterfront, the alleyways where ancient myths and magic spill into the modern world. Come meet Jilly, painting wonders in the rough city streets; and Geordie, playing fiddle while he dreams of a ghost; and the Angel of Grasso Street gathering the fey and the wild and the poor and the lost. Gemmins live in abandoned cars and skells traverse the tunnels below, while mermaids swim in the grey harbor waters and fill the cold night with their song.

Like Mark Helprin's A Winter's Tale and John Crowley's Little, Big, Dreams Underfoot is a must-read book not only for fans of urban fantasy but for all who seek magic in everyday life.


I have to admit, when I first got a hold of a copy of Dreams Underfoot (back in 1994) I was disappointed to realize it was an anthology of short stories, not a novel. Up until that time I'd only read Charles de Lint's novels - I don't think I even knew he wrote short stories as well. My disappointment lasted until I read the first story, when I discovered that his short fiction was every bit as compelling as his long.

This is not the first time I've re-read this anthology, and I dare say it won't be the last. Charles de Lint is one of the very few authors whose work I purchase in hard back and his books now spill over onto a second shelf in my book case.

To say I love the work of Charles de Lint would be a gross understatement. I want to visit his fictional city of Newford, where the stories in Dreams Underfoot are set. I want to walk its streets and visit its cafes and wander through the park. I want to meet Jilly and Sophie and Geordie - characters that are so vivid they must be real.

The writing is lyrical, you want to read these stories aloud. And you want to read them slowly, to savour them. Myths and folklore are deftly woven through the here and now, fantasy is married to reality, fairy tales appear in an urban setting. If you love fantasy, especially urban fantasy, you'll want to read Dreams Underfoot.

If you'd like to find out more about Charles de Lint and where you can purchase his books, I suggest you start with his website.