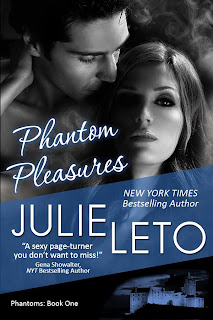 When hotshot hotel developer Alexa Chandler finally finds the perfect property for her next luxury resort, she has no idea of the black magic she’s about to unleash. Thanks to vivid tales from the locals, no one has breached the shores of the mysterious island or entered the abandoned castle that is its centerpiece in recent memory. But once inside, Alexa discovers another mystery—the portrait of a dark and brooding nobleman.

With a single touch, Alexa unleashes a phantom who has been trapped within the canvas for over two hundred years. Contained by a gypsy curse, Damon Forsyth has had centuries to think of nothing but revenge and retribution until intense desire draws the beautiful Alexa to his lair. Though free of the painting, he is still bound to the castle. Only by using the dark magic that enslaves him can he initiate a game of seduction that will end with his freedom—and her undoing.

Unable to resist, Alexa surrenders to Damon’s ghostly touch. But will she thwart the magic that holds Damon in thrall…or sacrifice her own mortality in the name of love?


I really enjoyed this book. Any complaints I may have are pretty minor and had to do with characters rather than the story. It took me a while to warm up to the character of Alexa. I didn't like her single-mindedness in wanting to turn the castle into a hotel, especially when she didn't know Damon's story - and didn't seem all that interested in helping him. It took me about mid-book to like her better.

I also didn't like her step-brother Jacob. And it wasn't the hints we had of his dark past, it was his too-quick turnaround at the end. He went from self-serving embezzler to a sudden concern about his step-sister and guilt over what he'd done to her in the past. Sure he redeemed himself in the end, but it happened way too quickly.

The rest of the characters I loved. Damon was everything a hero should be. We knew he was just kidding himself when he thought he was only using Alexa to escape. And Cat and Ben deserve a book of their own - I loved how they both had very good reasons for not getting involved and yet they did anyway. And Paschal, Ben's father, almost steals the show. I thought there was more to him than there appeared to be, but I didn't think he'd turn out to be who he was.

The story seemed straightforward at first, but there were a few surprises along the way. I never suspected the person who showed up near the end to be one of the bad guys. There was lots of action and lots of romance, in addition to mystery, magic, and suspense. The best part is, there's two more already written in this series and according to the author's webstite there's plans for three more.

Phantom Pleasures a steal at only $0.99 cents from Amazon