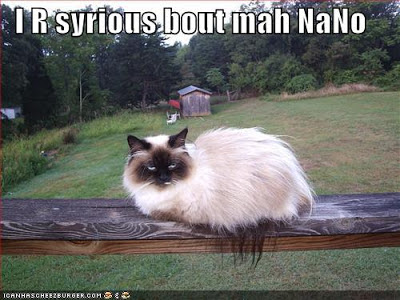 Yes folks, it's that time of year again. Time to ignore dirty dishes in the sink, hungry looks from your family, and pretty much everything until the daily 1667 words are written. That's how many words you need to write to reach your Nano goal of 50,000 words by the end of the day.

What's NaNoWriMo you ask? What, have you been living under a rock or something? Just got out of prison where you were kept away from social media? Just climbed down off one of those mountains in Tibet where they don't have internet access? Just weren't paying attention?

If so, go HERE. Go ahead, I'll still be here when you get back. And while you're at it, sign up and give it a try. Even if you don't make the 50,000 word goal you'll still end up with more words than you started out with and that in itself is something.

And now you're probably saying "It's too late, the month's already started" and to this I say "Phooey!" It's never too late to start. Well, okay, maybe November 30th would be a bad time to start, but other than that . . . One year I was up to 7,000 words when I ground to a halt with my story after five days. Two days later I started again with a new story and I still managed to make the 50,000 word goal - and I didn't even need to count my original 7,000 words! So I'll give you a week to start. ;-)

Anyway, as I mentioned in my Monday post, I've cut back on the blogging for the month and instead of doing poetry and flash fiction on Fridays, I'm doing a NaNo update as well as an excerpt from my work in progress. And for those who want to keep track of how I'm doing during the rest of the week, there's a NaNo progress bar on the left side of the page that changes every time I update my word count. 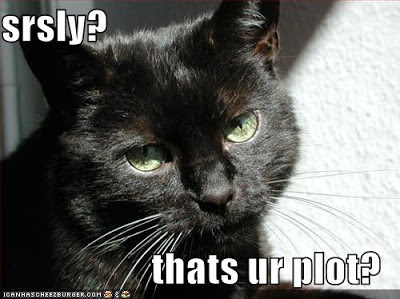 One more thing . . . since this is only day two of NaNo, you're only getting a short excerpt, which is the prologue to the novel. Next week I'll probably be posting something a little longer.

The small camp fire had died to a pile of burning embers within a ragged ring of stones. In the distance, a wolf howled mournfully at the quarter moon that glimmered faintly through the trees. There was no wind, but small rustlings filled the night air. Oblivious, the cloak-wrapped figure beside what was left of the fire snored gently.

The chestnut mare, tethered nearby, whickered and pawed the ground as a shadow stole into the camp. Ghosting from tree to tree, the shadow made its way carefully to where a set of saddlebags leaned up against a tree near to where the sleeper lay. With infinite care and a delicate touch that belied his size, he searched the bags thoroughly.

What he was looking for was not in there. Biting back a frustrated sigh he sat back on his heels and looked around the small camp. There, the tree the horse was tied to. There was a pack lying at its base. The would-be thief cautiously moved in that direction and swore softly as he stumbled over the saddle left carelessly near the horse.

He froze as his intended victim muttered and stirred. The sleeper muttered incoherently and one slim arm freed itself from the cloak long enough to gesture in the air. There was a crackle of static, a flash of blue light, and the sleeper slept on.

Interesting beginning! I like the hint of paranormal--at least I'm guessing that is what the flash of blue light is.

Great scene setup. I know exactly where everyone is and I can't help but wonder what happens next.

Love your imagery! You have a very vivid story here. Can't wait to read more :)

I was thinking you'd written a Western until the MC killed the thief with magic lightning bolts from his mind :)