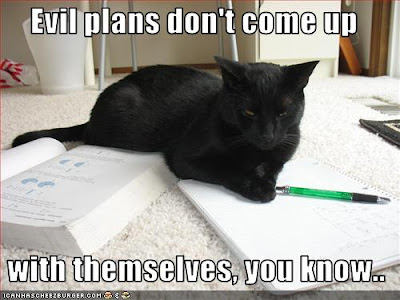 Oops! Well, we're off to a great start, aren't we? Not only am I behind in my words, I forgot to do my update before bed last night. Normally I write posts the night before and schedule them 'cause I like them to appear at 8 a.m. And if I were to wait until morning to get these things done, I'd have to get up at an ungodly hour and although I am capable of doing so, even the cats don't expect me up until between 8 and 8:30. So that's my excuse the reason this post is late.

Falling behind is all just part of the Nano fun, for me at least. Okay, maybe it's not fun, but it's not totally unexpected. I was doing good until about Tuesday . . . Tuesday I only got a few words written, but I did get a chapter for the book that precedes my Nano novel done. I spent a lot of time looking for the maps I'd drawn up (about 10 years ago) for the fantasy world my novel is set in. I must have found about ten of them, but fortunately I'd had the foresight to number them so I knew how they went together. Very cool!

Wednesday I was out most of the day and when I finally got home I had a chapter to do for my other on-line serial. This novel had been giving me problems but for some reason it didn't this week. Then, to make up for all the grief it had been giving me previously, it suddenly came life with ideas for the next couple of chapters as well. And of course I had to write them down too. So the good news is, the next couple of installments of it will be a snap. The bad news is that it meant no Nano words.

Then yesterday I had to drive to Toronto in the morning and I didn't really get to the writing until late afternoon, at which point I discovered an interview questionnaire in my email that I had to fill out for my poetry group for promotion for the reading I'm doing next week, and that took three hours - they ask hard questions. ;-)

So now here I am, and I have the whole weekend ahead of me with nothing more pressing than grocery shopping in the next three days. I have every reason to expect to be all caught up on my Nano by Sunday night. You know, so I can fall behind again next week. LOL

Before I get to this week's excerpt, I want to point out the list - which is pretty darn obvious but needs a bit of explanation. This list is for the Absolute Write NaNo Excerpt Blog Chain. Each of the participants on the list have pledged to post an excerpt from their NaNo novel every Friday for the duration of the month. Please check them out and if you have time, leave a word of encouragement in the comments. 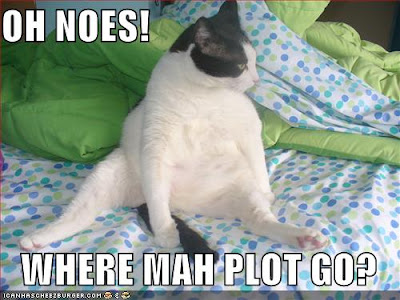 If you want to see what happened just before this scene, click HERE.

This excerpt starts a couple of pages after last week's. My heroine, Jessica, was accidentally sent to a parallel universe where magic is real and people live and die by the sword. What she doesn't realize is that she originally came from this world, which is why she suddenly has magical abilities of her own. She's currently travelling through an expanse called the Darkwood Forest and has awoken to find a large black dog hanging around her campsite and a pile of men's clothing near her saddlebags. Her only connection to her home is a moonstone amulet she wears around her neck, through which she can talk to her friend Howard (who is the one responsible for her being in this new world).

"How do you think? It was cold, the ground was hard and some animal started rooting around the campsite. Probably that dog." She glared at the animal in question, as though he were to blame for the change in the weather.

There was a doggy grin on his face as he sat there with his tongue lolling out of his mouth.

"You mentioned a pile of clothing . . . could you check them for me?"

"You're really losing it Howard." Jessica folded the clothes neatly and set them aside. "The boots have knife sheaths, fully loaded. And . . . " Jessica paused. "Howard, there's a couple of really big knives and a huge sword here. What's going on? I can see the dog being able to make enough trips to account for the clothes and boots, I don't see him carrying off the weapons." She looked around nervously. "Who left all this stuff here and why?"

"Jess, I--" Howard paused, then restarted. "Did you notice anything special when you heard that animal rooting around in your camp last night?"

Her brow furrowed. "I didn't really wake up, but there might have been some lightning. I was too tired to worry about it really."

Howard sighed. "I thought so."

"Given your temper, Jess, what's the first thing you would have said when your sleep was disturbed?"

"Howard . . ." Jessica sighed and rubbed her temples. She hated it when he got like this. "I'd probably say something like son of a --" Jessica swivelled around and stared at the dog, who backed away from the look on her face. "You're not suggesting . . ."

"It's consistent with your loss of power Jess."

"How could this happen without me being aware of it?"

"This kind of spell takes more instinct than concentration."

"Well it serves you right," she told the dog. "Who do you think you are, sneaking up on me at night. You're probably a thief and the world's better off with you as a dog."

The dog simply sat, watching her.

"At this rate I'll never build up enough power to get back home," she muttered angrily. "All right Howard. Tell me how to change him back."

Howard spoke quickly. "The thing is, you'll have to wait until the next quarter of a waning moon to reverse the spell because it appears to be tied to the lunar cycle."

"You mean I'm stuck with this dog for a month?"

"That about sums it up, Jess."

Jessica glared at the dog. His tail thumped the ground.

"Look at the bright side, Jess. For the next month you'll have someone to talk to besides your horse."

Haha. I thought the dog transformation was brilliant. The humor was great. Looking forward to next week's excerpt!

So the thief wasn't kilt after all! Good for him, I suppose. Given the characters in the first bit, though, my first thought was that Howard is the horse (who knows?).

Did you ever hear of the video game "The Longest Journey" and its sequel "Dreamfall?" It has a similar conceit of a person returning to the magic world of their birth and is a ton of fun :)