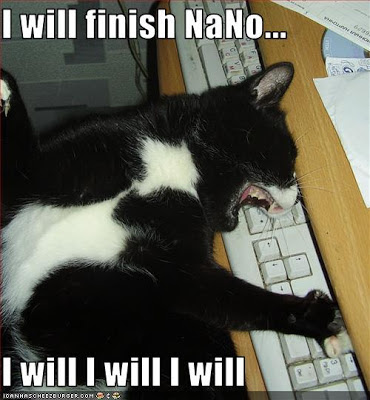 Well, as you can see, I'm still struggling to catch up on my word count. And unlike the previous weeks, I can't even use the weather as an excuse. The weather this past week has been nice and sunny, but my energy has still been somewhat lacking.

While it's still possible to catch up and win this thing, there's still about a 50/50 chance I might not. I have the time, I have the ideas, but what I also have a serious lack of is motivation.

I really need to get my head back in the game if I'm going to complete my NaNo this year. But honestly, right now I feel more like napping than writing. *sigh*

Once again, here's the list of my fellow NaNoers from Absolute Write. Please check them out and leave a word of encouragement in the comments. And don't forget to congratulation those overachievers who've already won! :-) 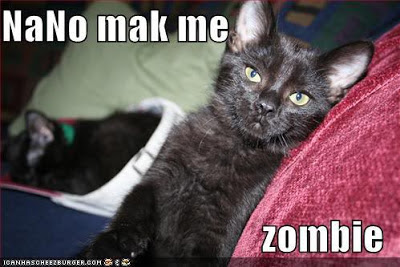 If you'd like to see the previous excerpts from my NaNo, we have Week One and Week Two, and Week 3.

This week's excerpt is pretty self-explanatory. Jessica and the man she accidentally turned into a dog (whom she calls Bandit) are enjoying some down time. The amulet she refers to is a magical link between her and her best friend, Howard, who accidentally sent her to this magical realm and it's their only means of communication.


It was a beautiful day. They followed the stream and when they came to the place Jessica had found to learn magic, they stopped. Bandit stretched out on a raised, flat rock to enjoy the sun. Jessica thought about contacting Howard to get a little magic practice in, but decided it was too nice a day for work. Instead she stretched out beside Bandit and in minutes they were both fast asleep.

A few hours later, Jessica woke with a start. Something was wrong but she couldn't quite put her finger on it. She sat up and looked around them, but other than the shadows being much longer, there didn't seem to be anything amiss. Her hand went automatically to the amulet to call Howard to check things out, but the amulet wasn't there.

"Oh my god!" She patted herself down frantically, but the amulet was gone. She got to her feet and gave her clothing a shake, hoping it was just a matter of the chain breaking and the pendant slipping down inside her clothing. But nothing fell out.

He lifted his head and looked at her blearily.

Her frantic voice got through to him and he quickly got to his feet.

"Ohmygodohmygodohmygod! What am I going to do? That was my only link to Howard. I am so screwed without him!"

She sank to the ground, eyes wide with panic. "I can't believe I lost it."

Bandit was sniffing the ground around them. Despite the fact he'd started out as a man, there were some characteristics of dog that he was given and a heightened sense of smell was one of them. He criss-crossed the rock, stopping suddenly to bark.

"What is it? Did you find it?" She turned a hopeful look in his direction.

He shook his head no, then pawed the ground and growled.

Jessica tried to see what he was looking at. "I don't -" There, in the loose dirt in a depression of the rock. "Is that a footprint?" Her voice rose. "Are you trying to tell me I didn't lose my amulet, someone stole it?"

Bandit dipped his head in a nod.

"Holy Saint Christopher! I can't believe I slept so heavily that someone was able to actually take my medallion off of me without waking me up."

Lifting his head, Bandit sniffed a couple of times with his nose in the air, then sneezed. He looked at Jessica expectantly.

He repeated his actions and her brow furrowed in concentration. "Something in the air?"

His head went up and down in a nod yes.

"Something in the air . . . like magic? Someone used magic to spell us to sleep heavier?"

This time he barked and nodded.

Jessica's panic was burning away with anger. "God damn them to hell! Do you think you'd be able to track their scent?"

He started at the footprint and then sniffed the ground around it. Catching the scent a little further on, he began to follow the trail.

"All right Bandit! Let's get the bastard, whoever he is!"

For the last NaNo days I wish you all the best and all the motivation you need to finish the contest successfully! You'll gonna make it! :-)