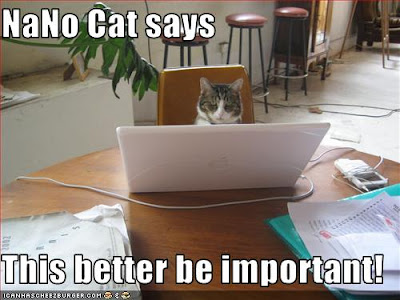 Wow. Here we are. The final day of NaNo.

As you can see by my official NaNo word count widget on the left, I did it. I completed my 50,000 words in 30 days. But I gotta tell you, it was a close thing. Over the past few weeks I almost threw in the towel several times, but I'm nothing, if not persistent. :-)

This week I finally got my writing mojo back. Whether it was a change in weather, the cutting myself off from the rest of the world, or my husband's incessant nagging - I couldn't tell you. But something worked.

Maybe it was throwing zombies into the mix. Yes, that's right. I have zombies in my swords and sorcery, swash-buckling fantasy story. And they were necessary. My character even gives a very long winded explanation of them.

And while I may have completed the challenge, my story is far from over. There were a couple of times when my writing was going well that I worried that I wouldn't have enough story for the words needed. So I came up with a new plot twist that will add another 20,000 words on top of what I already have. But at least I won't have to be in a rush to write them.

Once again, here's the list of my fellow NaNoers from Absolute Write. Please check them out and leave a few words of admiration in the comments. 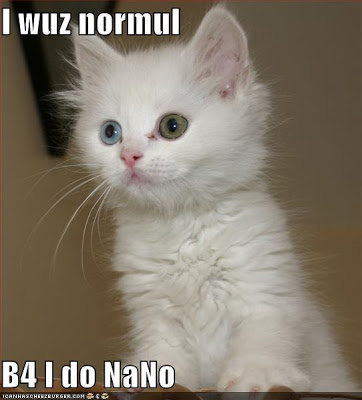 If you'd like to see the previous excerpts from my NaNo, we have Week One, Week Two, Week Three, and Week Four.

And don't forget to check back tomorrow for my NaNo Wrap-up post.

This one's pretty simple. Jessica's amulet, which allows her to communicate with her friend Howard, has been stolen. Now she's on her own, magically speaking, except for a book of magic that was in her travel pack. She's decided she needs to learn how to use the book to perform spells.


Jessica sighed and closed the book. "Even the simple spells are hard. There's one for causing rain that calls for sixteen different hand signals -- and even that won't work if there's no clouds to start with."

The dog whuffed softly at her.

She fidgeted under his scrutiny. "I know what you're wondering," she admitted. "No, I haven't found a transformation or reversal spell. But I'm sure I'm getting close, they're getting harder."

Another day's ride made Jessica more confident in her ability. Some of the spells relied solely on power, but others required little power, relying on incantations and hand movements. One love spell required nothing but dance movements.

"Howard always told me that wizards guard their spell books jealously," she said, "and it's no wonder. With enough power and physical dexterity you can do virtually anything."

Bandit gave another bark and nosed at the saddle bag.

"All right, all right. I can take a hint." She pulled the saddle bag closer and searched inside with her hand. Frowning, she opened it up fully and peered inside. "I don't know how to tell you this, but we're out of food."

His head drooped and he whined softly.

Jessica opened the spell book again. "You know, this is the perfect opportunity to test one of these spells. I'm sure I saw a spell for conjuring up a chicken dinner. If I can just - here it is! Chicken Flambé."

"Well it's chicken something or other, and it looks close enough to flambé for me to give it a try."

He prudently backed off a few paces to watch, rather dubiously, as Jessica prepared the spell. She sat cross-legged in front of the fire, spell book spread across her lap. After reading the spell over several times she finally nodded to herself and straightened her back.

Hands waving madly, she started. "Ip reel fela, shidd yib jev -- jev -- jev --" the fire snapped and flared as she paused and looked at the book, "crelna, isit sin gallow!" With a flourish she gestured in the air.

The blast from the fire knocked her over backwards. She could hear Bandit's high pitched yelp over the roar of the flames. An indistinct but enormous creature towered over them.

Jessica levered herself up on her elbows, gaping in shock. Bandit circled round to stand beside her. The creature was gaining solidity and let loose and awful scream.

"It looks ..." Jessica sat up better and gulped. "Holy Saint Christopher! It looks like a giant, flaming chicken!"

What?" He pawed the book in her lap. "Right, a banishing spell. Good idea."

The chicken let out another scream. Jessica edged away from it as she leafed rapidly through the book.

"Banishing, banishing ..." She looked up quickly and felt the first stirrings of desperation. She had the feeling that if she didn't find the banishing spell before the creature finished taking corporeal form they'd be in a world of trouble.

It was a rooster, not a chicken, that was forming in all its flaming glory. It flapped transparent wings sending waves of heat in Jessica's direction. She coughed and backed away again.

"Here it is!" she exclaimed.

The rooster crowed, gaining substance. It swept its head downwards. Bandit started to bark, distracting it away from Jessica. A shower of sparks sprayed upwards as it spread its wings and swept around, following the dog.

Jessica raised her hands and started to gesture again. The words she spoke were lost in the roar as the rooster crowed again. Jessica finished the spell. With a whuff of displaced air the bird, along with their fire, disappeared.

"Well," Jessica said, dusting her hands off with a nonchalance she was far from feeling, "that wasn't so bad for a first try, was it?"

a.) Congratulations on completing! I finished just yesterday, so I am also a last minute Louie ;D

b.) Love the excerpt. This is something I'd surely love to read once it's completed.