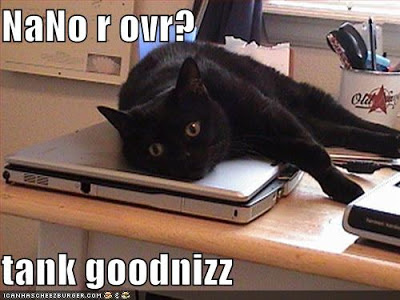 Happy first day of December. For thousands of us, that means finally being able to give our keyboards a rest. I don't know how many people signed up for or completed NaNo this year, but there were over three billion words written in the month of November. That's a heck of a lot of words.

But now we can go back to reading a book, or watching TV, or even just come out of our caves to join the world again without feeling guilty. NaNoWriMo is over!

As you may or may not know, this is not my first NaNo win. I actually wasn't even going to do NaNo this year, but I'd talked a few of the ladies from my writer's group into giving it a try, even going so far as to giving a NaNo info session at the library and talking them into giving us a couple of write-ins, so I pretty much had to participate.

So let's start by re-capping my previous NaNo wins:

The first time I won was amazing. After years of writing (mostly poetry, short stories and articles) I had not only finished a novel, I did it in 30 days. Ironically, I almost didn't try. For the two weeks prior to November I wasn't able to write a word. Then November 1st a name popped into my head - Treasure Beaumont. Then her story, called Forever and For Always started just spilling out onto my keyboard.

The second time I won was even more amazing. Not only had I finished another novel and within the 30 days, it wasn’t going to require nearly as much editing. This one is called The Faery Heart, but it too is still waiting on my hard drive.

The third year was interesting. I had my idea well in advance – I knew the characters and the story, I even knew the setting. And then at the last minute I was seduced by a shiny new idea. 12,000 words into it, I discovered that not all ideas are suited to NaNo, so after taking a day to think about it, I scrapped it and started from scratch again. I won NaNo with my original idea, Quest of the Valkyrie, and did not even need to include the 12,000 words from the story I started with.

The fourth year I again thought I'd give NaNo a pass. I already had three not-quite-finished novels and I wasn't really sure I had the time. But somehow or other I found myself sitting down at the keyboard on November 1st and not stopping until I reached my 50,000 words. This one was called Fire and Ice.

Which brings us to this year. I have to admit it, my heart just wasn't in it this year. I'd had a massive overdose of grey, miserable weather and was feeling depressed and unmotivated. I started out strong, the first four days I was ahead of the game, but then I had to really struggle for my word count. I had six days with no word count at all. By the second week I was behind by 7,000 words and I stayed well behind until day 26. Finally the spirit of NaNo kicked in and I wrote 15,000 words in four days, reaching the 50,000 mark in the wee hours of November 29.

There were a lot of things about NaNo that were different this year than previous years. First of all, I wrote my novel in a linear fashion. All the other years I would write until I got stuck, then skip ahead to something more interesting and then go back and fill in the gaps - or sometimes not, which is probably part of the reason why those novels are still waiting to get finished.

Something else new to me this year was going to a write-in. We had two at our library and to be honest, I didn't find them very helpful. I found I got more writing done when a friend and I went to Timmies and McDonalds.

I also went into semi-hermit status this year. As the month went on and my word count wasn't keeping up, I started to avoid going out and even cut myself off from the internet - especially my email and Facebook. There were many times when I was ready to throw in the towel, but I'm nothing in not persistent. However, I felt really stressed out most of the time - it was like pulling teeth to get the words to come, until those last four days.

But I made it through, that's the important part. And although I reached my 50,000 words I've still got about 20,000 before the story's done. So that makes FIVE not-quite-finished NaNo novels I have. For the record, I'd like to state that I unless I have at least two of those novels completely finished and edited next year, I will not be doing NaNo.

So if you see that little NaNo widget go up next year with the name Lady Cat on it, you can totally call me on it. ;-) 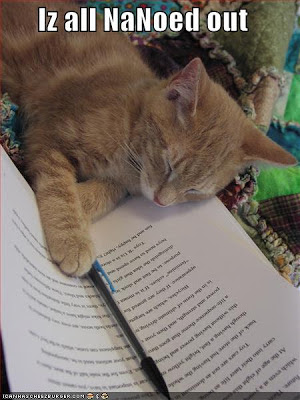 Also a winner! Hurray Us!
I find I am far too social to write with others. I can't have anything interesting on the tv or I keep popping out of my chair like a groundhog to see what's happening. I need instrumental music (that I don't appreciate much) and a very stern 'you must write' attitude. Actually had an idea this year (last time sucked - no idea for most of it, just kept writing: means only about 10K of the 50 is worth anything)
but this is at least 4 wins for me now. :D will start editing in January.. brain requires recharging for now.