Calliope
the Muses - Part I 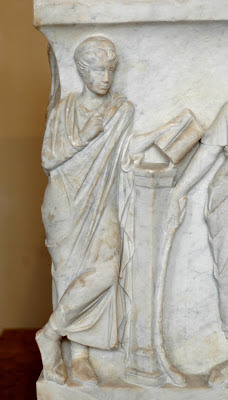 Calliope is the Muse of heroic poetry and eloquence. The name Calliope (or Kalliope as it is sometimes spelled) means beautiful (kale) voice (ops). Her beautiful voice inspires brilliance in debate and makes even the weakest poetry powerful. Calliope has also come to represent creativity in artistic or musical expression, and perseverance and patience.

Research has produced conflicting information regarding Calliope's lovers and children. She is said to have had several sons by the god Ares: Mygdon, Edonus, Biston, and Odomantus. Her name is also linked to the god Apollo, with whom she had sons Hymenaios, god of the wedding hymn, Ialemus the personification of the funeral dirge expressing grief at the death of young people, and Orpheus (also said to be the son of King Oeagrus of Thrace) who was able to enchant even mountain rocks and rushing streams with his voice. Calliope is also rumoured to have formed an attachment to the Greek hero Achilles, but merely taught him rowdy drinking songs.

She was at one time called on by Zeus to mediate a dispute between Aphrodite and Persephone over who was to receive Adonis. She ruled that each of the goddesses would be with him from half a year, but Aphrodite was not happy with the decision. She caused the women of Thrace to fall in love with Calliope's son Orpheus and they tore him apart, each seeking to possess him.

Calliope was well known as Homer's Muse, inspiring him to write the Iliad and the Odyssey. Images of Calliope usually show her with a writing tablet in her hand, or carrying a scroll. She has also been depicted holding either a lyre or a volume of Homer's work.

The musical instrument known as the calliope was named after the Muse. Sound is produced by forcing steam through large whistles. There is no way to control the loudness of it so it's audible for miles around. The calliope was largely used in circuses and riverboats, but is rarely seen today.