The Organization of the Craft Closet

One of my goals for the year is to spend more time doing crafts. Now this might seem like a strange goal to some people, but here's the thing: I used to do many crafts. I used to do many, many crafts, especially in front of the TV at night - sewing, knitting, crocheting, embroidery, cross stitch, rug hooking, beading . . . you get the idea. And over the years I've amassed an impressive amount of craft supplies, all crammed together in my large storage closet.

Sadly, ever since I got my first lap top, I started doing less crafts and more internet surfing and for the last couple of years pretty much the only time I did any kind of craft at all were the few times we went to a barbeque at the cottage and I'd take my bag of crocheting.

But crafting is fun, relaxing, and people love receiving hand crafted gifts. So, this year I resolved to work a little crafting time into my daily/weekly routine. However, first I needed to get at my crafting supplies, which were piled, stuffed, and stacked in the Crafting Closet, also known as the Big Closet of Doom From Which There is No Return.

Here's a picture of the closet at the start of my two day organizational blitz. 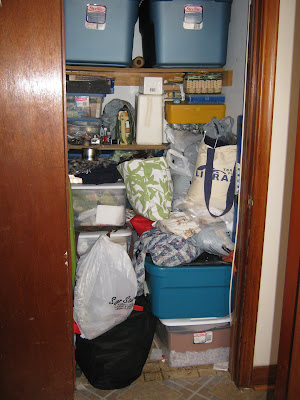 It probably doesn't look all that bad to you, but it's hard to tell from the picture just how deep it is. Those shelves are about three feet deep, and stuff is piled in there without any rhyme or reason. 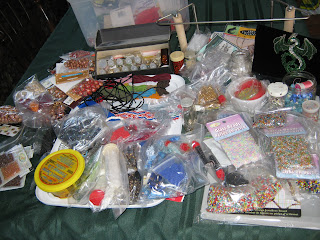 My beading supplies were actually well organized - I organized the glass beads by colour in baggies, although the wooden beads were just kept in their packages. I did manage to get everything into a single plastic bin instead of two smaller bins and a box.


Next I tackled my wool supply and various projects using wool. This is Wool Mountain: 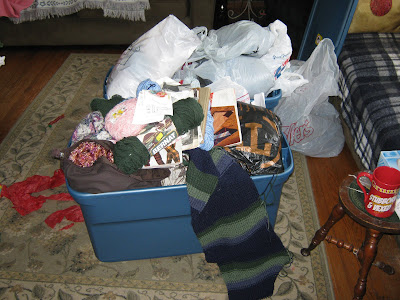 The bin in the foreground is filled with miscellaneous wool, partially finished projects, and pattern books. The bin behind it is filled with . . . more of the same. And after spending several hours sorting I ended up with this: 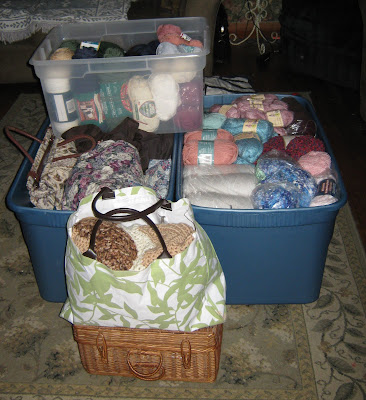 The bin on the right is filled with wool in large amounts to do sweaters or afghans. The bin on the left is filled with extra wool that wouldn't fit into the other bin, as well as the knitting and crocheting projects I have waiting to be finished. The clear bin up top is filled with odds and ends of wool - enough to do mitts or slippers or small projects. The basket holds my pattern books, hooks and needles, while the bag contains the afghan that will be my first project to finish. 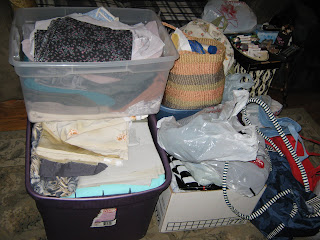 This is a picture of Stitchery Mountain - two large tubs of unused fabric, bags of embroidery and cross stitch projects and supplies, and quilting stuff, including the tops of two children's quilts I never finished. It was actually worse than it appears in the picture. ;-)


And here is my finished closet: 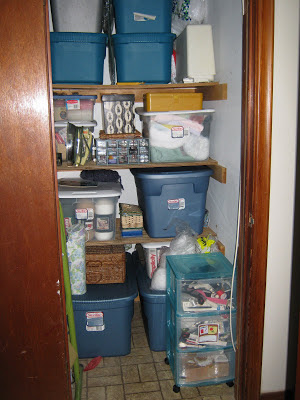 Sewing on the top shelf. Beading and sewing on the next shelf down. Wool and stitchery on the third shelf down. And knitting/crocheting on the floor. The little cart thingy is new and holds sewing notions (zippers, buttons, lace, etc.) in the top two drawers and the bottom drawer has patterns, wool and crochet cotton for crocheted Christmas decorations that I can work at year round. And yeah, that's another box of patterns on top of one of the blue bins, but they used to be in the blue bin on the shelf above it, so I got rid of a lot of them.

And I have to be honest here. When I saw the before and after pictures side by side I was a little disappointed - they didn't look much different. So just to impress you, I took a picture of Junk Mountain - the stuff that didn't go back into the closet. 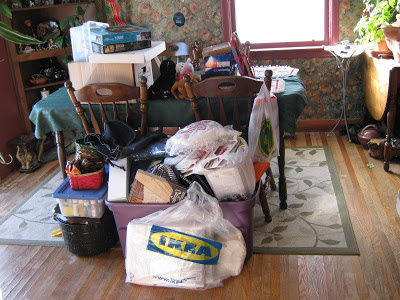 And just so you know, most of that purple bin is filled with fabric I'm parting with. Some of the stuff found a home elsewhere, most of it is getting donated.

They look different to me. When I saw the after shot I wondered where you stuffed all the stuff - then you showed you getting-rid-of-pile. That's quite a bit stuff. Congrats!