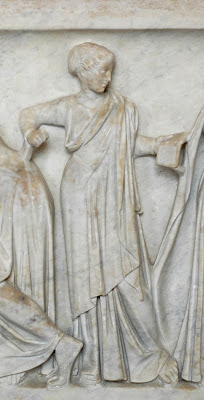 The name Clio (also spelled Kleio) is derived from kleos, the Greek term for heroic acts, which in turn comes from the Greek verb kleo which means to make famous or celebrate. She is the Muse of history and writing.

Clio is both a scholar and a researcher and is often called the Proclaimer. She is credited with introducing the Phoenician alphabet to the Greeks. Clio ignites the desire to investigate and record, to give an account of events that have happened or as they are happening. When we record our past, we learn from both our victories and our failures, thus learning from our mistakes and being better equipped to plan for the future.

She teased the goddess Aphrodite for loving Adonis and Aphrodite in turn caused Clio to fall in love with Pierius, the king of Macedonia. They had one child, a son named Hyacinth whose beauty attracted the attention of both Apollo and the West Wind, Zephyrus. He became Apollo's lover and when he was accidentally killed, Apollo had him turned into a flower, the hyacinth, rather than allow Hades to claim him.

Clio is usually shown wearing purple, with laurels in her hair. In her hand she holds an open scroll or book, and often with a clarion (a medieval brass instrument similar to a trumpet) as well