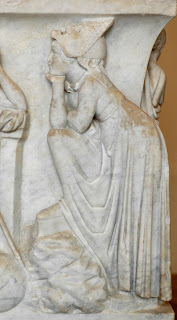 In the beginning Melpomene was the Muse of song, along with Erato and Euterpe, but became the Muse of tragedy and all things drama.

Her name was derived from the Greek verb melpô or melpomai meaning "to celebrate with dance and song." Her chanting charms and inspires her listeners and she is often invoked when a poet wished to create beautiful lyrical phrases.

While strolling along a river one day, she met and fell in love with a river god name Achelous, son of the Titan Tethys. Their offspring were the Sirens, the seductive deities who lived on an island.

Melpomene loves music and is very inquisitive by nature. At times philosophical, she is helpful to those who seek her guidance or counsel. Despite being theMmuse of tragedy, she is happiest when she is expressing herself creatively, often through her joyous singing. She dislikes conforming to a strict routine.

She is always portrayed with a tragedy mask, often wearing a crown of ivy on her head and cothurnus (boots worn by tragic actors) on her feet.