Much Ado About Crafts

So . . . I'd been hoping my turn in the AW blog chain would fall on today, seeing how I've run out of organizing type posts, but it's not going to be my turn until tomorrow. *sigh*

As I was sitting here last night, knitting away and trying to come up with something to blog about today it suddenly came to me (somewhere between dropping a single stitch to dropping the whole piece off my needles) that I was knitting. Pretty bright, aren't I? ;-)

The point is, I could blog about my crafting so far this year, which, as you may recall, was one of my goals: Make time for reading and crafts. Reading's easy - a little too easy sometimes. I spent Tuesday and Wednesday this week reading, and precious little else. I haven't updated my Goodreads so far this year . . . but that's fodder for a different post.

Although I do a variety of crafts, the two I've been making time for (so far) this year are knitting and crocheting. A little sporadically, mind you, but so far I've knitted two pair of slippers (both of which turned out to be too big for the recipients), started a scarf and crocheted three bookworms.

Okay, so maybe I'm not off to a great start, but it's something. And I'll really get going if I can just decide on what my bigger project is going to be. I'm thinking sweaters for Christmas . . .

I didn't think to take pictures of the slippers, but here's what they look like: 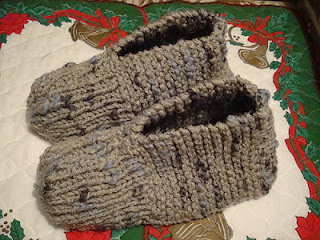 That's not my picture - I found it on Ravelry, but it's the same pattern. You can find it in the Beehive book # 115 (Bazaar Novelties and Gifts) and also in the free Patons Speedy Slippers Leaflet #304 (if you can find one).

I mentioned on Monday that I dipped my toe in the Sashay scarf pool . . . and how annoyed I was when I discovered a knot in the yarn. I ranted about this on Facebook too, and one of my buddies, who's done a bunch of these scarves, told me she finds knots in the yarn all the time and what to do about them. So I gave it another try: 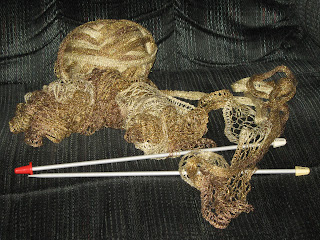 I've got about a foot done so far. It's stupidly easy, but slow going because it's kind of loose on the knitting needles and I live in fear of dropping a stitch, which I've done a couple of times or worse, having the whole thing sliding off the needles, which I've also done twice - the first time I had to start over again, the second time I managed to pick up the stitches again. Notice the nice red cap on the end of the needle for when I have to set it down?

If you click on the picture to make it bigger, you can get a better look at the yarn itself. It's more of a mesh like ribbon than yarn, and you have to kind of stretch it apart and pick up loops on the upper edge to knit with. If you're interested, you can find a pattern - with a video - HERE. I found the video very helpful and it not only proved it's as easy as the instructions make it seem, it had a great tip that isn't in the instructions.

I've been crocheting bookworms for as long as I can remember. I'm kind of disappointed in the way the picture turned out, but I'd already put everything away by the time I thought to check it, so you're stuck with it as it is: 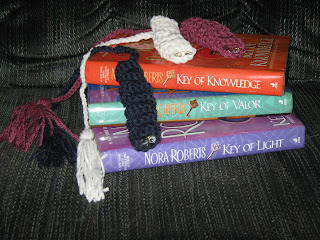 Again, you can click on the picture for a bigger view. These little guys have been around our house, hanging from rear view mirrors in cars, and used as cat toys for years. The hardest part about this trio was their glasses. I've always put eyes on them (unless they're going to be used as cat toys) but this is the first year I've tried glasses. I think it makes them look even cuter.

So there you have it. My crafting for the year thus far.