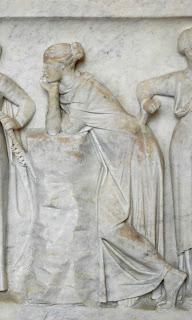 Polyhymnia is the Muse of divine poetry and sacred religious music, often referred to as "She of sacred hymns." Her name comes from the Greek words poly (many) and hymnos (praise or hymn) and means many songs. She brings honour and distinction to writers and poets.

She appears to be more circumspect than hers sisters, although according to several sources she is believed to have been the mother of Triptolemus, the threefold warrior who learned the art of agriculture from Demeter. His father was either Cheimarrhus (son of Ares), or Celeus (the king of Eleusis).

Compared to the other Muses, Polyhymnia is very serious and conservative. Because she is such a deep thinking person, she is also considered to be the Muse of thinkers and is credited for the invention of the science of geometry.

She is sometimes depicted as both pensive and meditative, often holding a finger to her mouth, dressed in a long cloak and veil and resting her elbow on a pillar. Most often she is shown looking up to the sky as she plays a lyre, which she is credited as inventing.

Many of the ancient Greek thinkers give credit and praise to Poyhymnia saying that it is she who helped inspire them to think great thoughts.