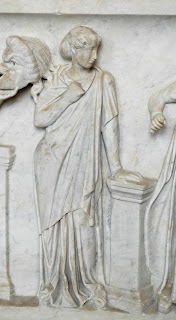 Terpsichore is the Muse of dancing and dramatic chorus. She's sometimes referred to as the "red" Muse because of the fiery colour of her hair. But despite her red hair she isn't temperamental. She is, in fact, one of the friendliest of the Muses.

Her name, which is sometimes spelled Terpsikhore, means "she who rejoices in the dance," taken from the Greek words tepein (delight) and xopoc (dance). And extension of her name is found in the word "terpsichorean" which means "of or relating to dance."

She is believed by some to be the true mother of the Sirens, fathered on her by the river god Achelous. The Sirens are creatures with the head of a woman and the body of a bird who lure mariners to their destruction with their beautiful songs. They're not to be confused with the Harpies, who have the bodies of vultures and harsh voices.

Terpsichore enjoys stories that flow well, include rich description, and have happy endings. She delights her disciples with the good things to be attained from education, choral dance, and song.

She is most often depicted sitting down and playing the lyre to accompany the choirs providing music for dancers.

Dearest to Terpsichore are those who honour her through their dance.