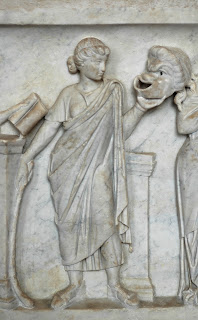 Thalia is the Muse of comedy, which the Greeks define as any story with a happy ending, and pastoral poetry. Her name is derived from the Greek word "thaleia" which means rich festivity or blooming. Thalia is also the name of one of the three Graces, and it is believed by some they are the same person.

After becoming intimate with Apollo, she gave birth to the Corybantes. These were seven male dancer/priests, armed and crested, who worshiped the goddess Cybele. They celebrated the goddess's licentious festival days with drumming and dancing.

Being the Muse of comedy, Thalia has a somewhat happier nature than her sisters. She seeks to bring out the humour and drama in life's situations. She loves inspiring dramatic creativity because she feels that acting is an insightful yet light-hearted way to experience life. Life is theatre and drama happens everywhere; comedy is the spice which keeps us laughing at ourselves.

Her goal is to breathe life into the theatre and to inspire others to develop the creative and dramatic sides to their personalities. She also enjoys wandering through meadows and forests, favouring more rural pursuits. This is why she is sometimes portrayed with a shepherd's crook.

She is most often shown holding a comic mask in her hand with boots on her feet and a crown of ivy on her head, the ivy considered sacred to her. Sometimes she's portrayed holding a bugle or trumpet as well, as these instruments were used to accompany the actors' voice in ancient comedy.

One of the favourite Muses, she is revered because those she favours flourish.