The first sign of spring has finally manifested itself. Yes, the ducks are back. 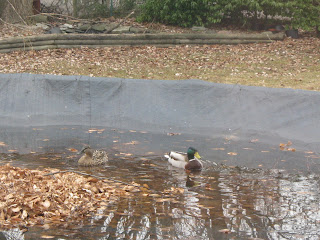 We have a pair of ducks (sometimes three of them) that return ever year to swim in the water on the pool cover. They usually arrive just before sunset, stay until it gets dark, and then disappear. They'll keep coming back for a couple of weeks and then we won't see them again until next year. And yesterday they staged a little MFM action in the back yard to entertain us while we were trying to eat our dinner. ;-)

I'm still getting spammed in the comments on my blogs, which means I'm getting a steady supply of these comments being sent to my email. It's a bit of a pain in the butt to have to deal with them, but it sure beats having them appear on my blogs. If you're looking into security measures for your blog, I highly recommend the comment moderation.

I spend a day in the wilds of Roseneath last week, getting some valuable business advice from my friend Shi Cheverie and her hubby. And as if that weren't enough, I got a bread maker and a treadmill out of the deal. Let's hear it for downsizing!

I took the bone from the ham we had for Easter, and the dried soup mix I got from the bulk food store a couple of weeks ago, and turned them into soup. I soaked the mix over night, added some shredded veggies, and cooked the soup all day. I've never tried a soup with ham before and I gotta say, it's one of the best soups I've ever made. Now it's one of the best soups in my freezer. :-)

It was a fairly quiet week last week, although I had lots of writing/editing to keep me busy. I'm at the halfway mark with the Magical Misfire edits. Feels good to finally be making some progress on it.

Remember how this is my year for getting organized? Well, Saturday afternoon I was all set to get some editing done but decided to start organizing my document files instead. At first glance it seems a tad overwhelming - I write a lot and I save everything - so I thought I'd start simple and picked my short stories to organize. Holy crap I've got a lot of stories! And some of them are even finished. :-)

I spent the afternoon and on into the evening pulling my short stories off the USB keys and pasting them into a folder of their own, and by the time I'd finished with my last key my enthusiasm was waning. I have my flash fiction separated into its own folder, but the rest is just a big mess. I'll need a folder for ideas, and one for finished stories, and one for partially finished stories and ideas, and . . . I'm sure you get the picture.

Craft-wise . . . I never even gave my crafts a thought last week. This is not good. The first quarter of the year has passed and I'll need to step it up if I'm going to be making presents for Christmas this year.

I did make a half-hearted stab at the taxes last week, and I really need to just suck it up and get them over and done with. Then I won't have to worry about them until next year. ;-)


Blog Stuff For the Week:

Tuesday: A poem.
Wednesday: A new Hump Day Hunk for your viewing pleasure.
Thursday: Chapter 61 of Water - what's next for Ravi and Taja?
Friday: Part two of my short story Cold Cure.

Other Stuff For the Week

I've got a writer's group meeting on Wednesday afternoon

Once again I'm participating in the Absolute Write Blog Chain and I want to get a jump start on my contribution so I'm not forced to rush. The topic is April Fool and I've already got an idea, I just need to work it out in my head some more before I start writing it done.

Still not feeling very inspired to write poetry, but since I've committed myself to posting a poem a week, I feel like I really should make an effort. Maybe I could even finish one of the many, many poems I've started then abandoned.

As I've already mentioned, I'm at the halfway mark with the edits for Magical Misfire and I'd really like to get the edits done this week so I can send it out to my readers. And speaking of readers, I'm down one, so if you would like to beta test my novel, drop me a line at: carolrward(at)gmail(dot)com