Of Snowflakes, Plants and Bread

I recently spent an afternoon with a group of ladies who needed a bit of help learning to crochet snowflakes with which they intend to use to decorate a Victorian Christmas tree. And when I say a bit of help, I mean a lot. Most of them had never crocheted before, and I have to applaud their eagerness to attempt something as intricate as a snowflake to learn with.

My friend who got me involved in this project has been struggling a bit with her snowflakes (quite frankly they look like they've started to melt) so she came over last week for a little one on one help. The pattern she chose was rather complicated, so I pulled out a big hook and some big wool to crochet along with her so she could get a better idea of what she should be doing: 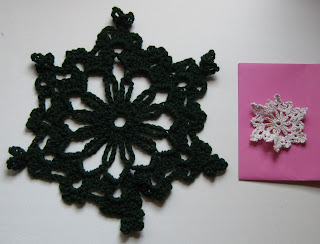 I let her take the giant snowflake home with her to refer to, but I couldn't help thinking that a bunch of snowflakes that size would look really cool hanging in my front window at Christmas time. And then I'm thinking you could sew a bunch of them together to make a table cloth or a shawl or even an afghan. Oh the curse of being a crafter!

Last week I crocheted a bunch of snowflakes for the group. I figured if I did ten each of five different patterns it would give them a nice start. So far I've done four different patterns and I'll probably do at least two or three more because my snowflakes are small. You know, tree ornament sized. ;-) 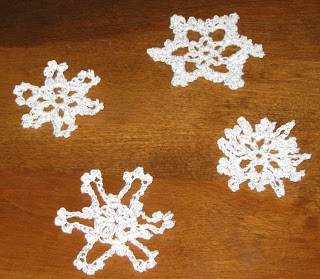 They'll look much better once they've been stiffened.

Being an earth sign, I love being surrounded by greenery. So I have a lot of plants in my house. My oldest plant (it's lasted over thirty years) is a philodendron that's started taking over the corner cabinet in my dining room: 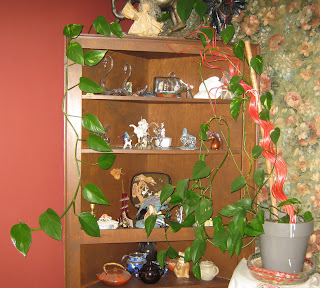 As you can see, the bamboo spiral thingies just aren't doing the job of keeping it under control. So I got the brilliant idea of using a trellis to try and tame it. So first I had to carefully unwind it from the unicorn statue on top of the corner cabinet, and get rid of the bamboo spirals. It's mostly just a single strand and this is what it looked like draped over the chairs in the dining room: 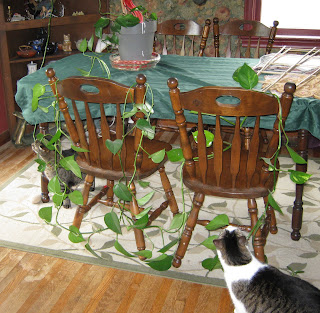 Please note the cats "helping". That's Julius (my husband's cat) in the foreground, and Dante under the table. Anyway, in spite of their help I tucked the vine in and around a bamboo trellis I found at the dollar store, and now my plant is not longer threatening to hang anyone who gets too close to the corner cabinet: 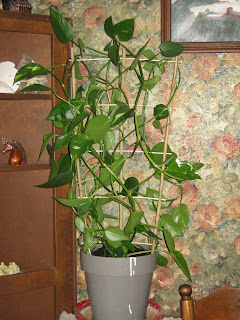 And last, but not least, for today, we come to the bread. A few weeks ago I was visiting a friend who lives out in the wilds of Roseneath, right on the shore of Rice Lake. She's been trying to downsize and as a result I came away with both a treadmill and a bread machine. Trust me, if you use a bread machine you need the treadmill!

Making bread seemed really intimidating to me. My mother made bread. She made all kinds of things but I remember the smell of her bread the most. I kept putting off trying out my bread machine until my friend decided to visit. So the night before she visited, I finally sucked it up and gave it a try.

Can we say easy peasy? Wow! Just throw the ingredients into the machine and it does all the work for you. My only mistake was setting it for a dark crust, which turned out to be a little too dark, but it was still awesome.

So then I decided to try something a little fancier, so I made an onion/cheese bread. OMG! Words fail when I try to describe the sheer awesomeness of this bread. My friend and I ate almost the entire thing. My husband doesn't realize how lucky he is we saved him any at all. 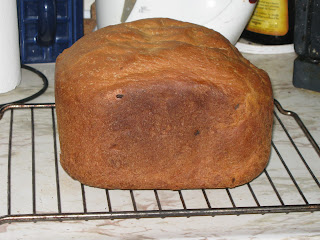 I like to think that Mom would be proud. :-)