mactation ~ killing or slaughter of a sacrificial victim

First of all, for those of you who read my Ramble on Friday, here is a picture of the finished terrarium: 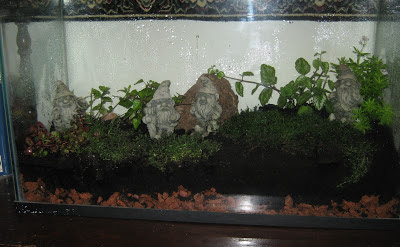 And for those of you who didn't read my Ramble, the picture is of an aquarium that I've had sitting in my upstairs hallway, filled with blankets and sheets, for about the last five years. At one time it held a family of gerbils (actually it was a family of ten gerbils), now it holds gnomes and shade loving plants. :-)

Summer is officially here. In the space of two days we've gone from, "Gee it's awfully cool for the middle of June" to "Boy is it hot and humid!". As I sit here late at night writing this, I have the fan on in my office. Normally I write this in the living room while watching TV, but the lap top generates too much heat to have comfortably on my lap for long in the summer.

I got some more knitting in last week. I'm about 2/3 of the way done the back of my sweater. Hopefully I'll get a day next week where I can indulge in a couple of hours of uninterrupted knitting - I'm ready to start the shaping for the arms and I'll want to do that all at once so I don't lose my place in the pattern. Yes, I use a stitch counter, but I'm also doing a lacy stitch instead of a stockinette stitch so there's a lot to keep track of.

I definitely got some work done on the business last week, but not by choice. My daughter took the bull by the horns and, well, to make a long story short, I have a new email address for the business (which I like better than the old one), new brochures, and a Facebook page. God only knows what she'll force feed me this week. LOL

One thing I did last week that I'm happy about, I caught up on my emails. And three of them were emails that required lengthy replies. Now everyone is back to owing me an email. As it should be. ;-)

Blog Stuff For the Week:

Tuesday: Part seven in my series on the Major Arcana of the Tarot will be The Chariot.
Wednesday: A new Hump Day Hunk for your viewing pleasure.
Thursday: Chapter 72 of Water. Looks like Ravi and Tarja are between a hot and a hard place. How are they going to get out of this one?
Friday: Hmm, I think it's time for a Ramble about social media and socializing in general.

Other Stuff For the Week

This week's focus is the edits for Magical Misfire. This book was supposed to be out by now, and I find myself dawdling over it. I did this with Elemental Fire too. It's like I don't want to finish the book or something. Good thing I'm not this slow with other people's books. :-)

I have a poetry group meeting Tuesday night - I think the poemwork was to write a poem from the point of view of an inanimate object. And I also think I'll be giving the poemwork a pass this time and read the sestina I wrote a while back. You can bet I'll be paying particular attention to this meeting to see what kind of atmosphere we have going on.

I also have a writer's group meeting this week, on Wednesday. I think I should send a group email out to suggest we meet at an alternate place than the one we decided on last time. First, I'm pretty sure it's supposed to rain on Wednesday. And second, we probably won't be able to meet in the park by the waterfront. The annual Waterfront Festival starts Thursday (I think) which means they'll be setting up in the space we used last time.