mellaginous ~ of, like or pertaining to or resembling honey

To be perfectly honest, I wasn't nearly as productive last week as I would have liked to have been. I suppose I could blame the rise in temperature (and humidity) that caused a spat of headaches, but I was also in a funk for the first part of the week and it took a while to get out of it. Just one of those things.

In any case, the big news of the week is, thanks to a shark movie marathon on the weekend (Ghost Shark, Sharkasaurus, and Swamp Shark), I finished my sweater. I had just enough yarn to finish. It may look short, but I'm short waisted and for me the length is just right. However, I did run into a minor problem.

As you know, I was working without a pattern. The idea was to knit two squares (with ribbing on the bottom) and then sew them together. This would give me a boatneck collar and a drop shoulder look. However, the sweater wasn't quite wide enough for the drop shoulder. I had a choice. I could either rip it out, again, or use my mad sewing skills to alter it.

As you know, I've already had to rip this sucker out a couple of times. So I took the sewing option. I just tucked the excess under and sewed the raw edge down. It actually looks pretty good, if I do say so myself. And it didn't turn out bulky either, but gave the armholes a nice stability. And because I know you're curious, here's a picture: 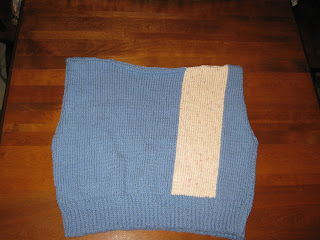 So . . . what else did I do last week? I got more reading in by forcing myself to take a break once in awhile and go sit out on the deck. It helped that I treated myself to a new brand of tea for break time - it's a green tea with lemongrass and spearmint. I went on a baking binge on Wednesday - a double batch of peanut butter cookies using chunky peanut butter; a batch of sugar free, gluten free cookies; and a batch of peanut butter cupcakes. I also caught up on a bunch of emails.

Blog Stuff For the Week:

Tuesday: Part fifteen in my series on the Major Arcana of the Tarot is The Devil.
Wednesday: A new hump day hunk for your viewing pleasure. ;-)
Thursday: Chapter 80 of Water. Finally! They've broken through to the Outside. But now what? You'll have to read it to see.
Friday: This week's Ramble will be all about my minions. Everyone should have minions, right? ;-)

This week's TraxTime report runs from August 18 through August 24.

Let's see . . . it makes sense that Crafts went down because I finished my sweater. I think it'll be back to crocheting for a while, at least until I work up the courage to start one of the two Icelandic sweaters I'm doing for Christmas presents.

The Emails time was up - as I said I wrote a bunch of them. And I was really happy to see that the Gaming time went down so much. At first I thought I must have missed clocking some of it, but then I realized I probably had the same number of sessions, I just wasn't spending as much on each one.

More time reading, more time writing, but less time editing. This could be because it was later in the week before I got my editing mojo back. Remember how I told you I was looking for some payback for those 649 comments a certain person made on Magical Misfire? Her novel is half that size, so I figured I owed her at least 325 comments.

Unfortunately, I didn't even make it to 100 comments. I think I'm going to have to go over it one more time, just to be sure. ;-)