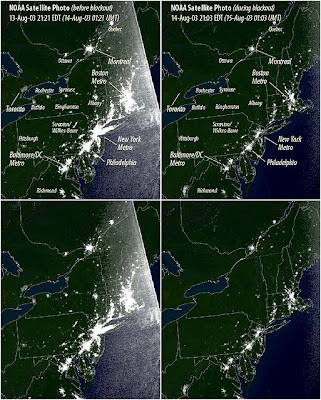 Where were you when the lights went out?

I was in the grocery store. There weren't many customers, and if you were using cash or a credit card you were allowed to check out (the store still had a couple of those old machines that you could run a credit card through to leave an impression on the credit slip). Debit card holders were out of luck.

I remember it was very quiet at home. We sat outside with a fire going, fired up the barbeque to cook supper on. The stars were absolutely breathtaking. Later I read by candle light. It was an awesome adventure.

We were some of the lucky ones in that our power was only out for about twenty-four hours. Some of the over 50 million people affected were without power for two or more days. One of the most amazing things about this power outage was the fact there was no increase in crime in our major city of Toronto. There were street parties, free food from restaurants using up what was in their freezers before it went bad, ice cream places giving out free ice cream, but no reports of looting.

They said afterwards that it was a fluke. It was a bizarre string of incidents that could never happen again. But that doesn't mean that we could never have another power outage on that scale. Threats of terrorist attacks aside, we've been have a lot of extreme weather lately that has been causing a number of small outages. Isn't it just a matter of time before it causes a big one? We were lucky with the outage of 2003, it happened in the summer time. Anyone remember the Ice Storm of '98?

Now, let me as you this. If your area were to experience a major power outage, no matter what season it was, would you be prepared? You can laugh at the survivalists and those who went to extreme measures to prepare for the end of the world in 2012, but as far as I'm concerned, these are the people who will best be prepared when things become unplugged.

Could you survive if the power went out?

Power outages are terrible. I would definitely not be prepared for one that lasted 24 hours or more. If you are interested, I tagged you for a meme on my blog.