I am pleased and proud to announce the release of my third novel, Magical Misfire, Book 1 of the Moonstone Chronicles.

All Jessica O'Connell wants is a little adventure, something to spice up her dreary life. Instead, her best friend Howard accidentally teleports her into a magical realm with their only link being a moonstone pendant that belonged to her mother. She's rescued from a cliff by a bona fide prince, attacked by a giant bird, makes friends with a squire and a real live bard, and vanquishes an army of illusions.

Then things get really interesting . . . 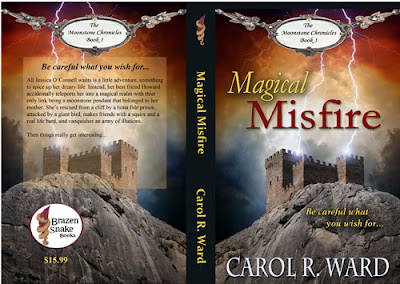 Cover art is by Jamie DeBree. Didn't she do an amazing job? :-)

Jessica's friend Howard talked her into being the guinea pig, so to speak, in an experiment he wanted to conduct on teleportation. However, he sends her much further than he intended. She awakens on a rocky shore and it doesn't take her long to realize the tide's coming in. Left with no other choice, she begins climbing the treacherous cliff that borders the shore. As she nears the top, and the end of her energy, she overhears two men talking.

“There is someone below!” a voice wafted downwards.

“Do not be a fool,” a second voice answered.

“I tell thee, my lord,” the first voice insisted, closer, “I heard a voice.”

Jessica clung to the cliff, dazed, as two shadowy figures appeared above her.

“Who are you and what do you there?” the second voice called down to her.

“Stupid damn question,” Jessica muttered under her breath. And what was with the hokey accents? “You’ll never find out if you don’t lend a hand,” she yelled back.

There was a momentary consultation before one of the figures ducked out of view and quickly returned. A coarse rope snaked down to meet her. Jessica caught it and with the last of her strength wrapped it around herself and hung on. The two figures at the other end began hauling and in no time at all she reached the cliff top and rolled over the edge in an ungraceful heap.

She lay for a few moments in the grass, breathing deeply. One of the voices began to speak but she cut them off with a wave of her hand. "Gimme a minute.”

When her breathing eased and she thought she could move without throwing up, she manoeuvred herself into a sitting position.

“Thanks,” she said finally. “It’s lucky for me you guys were up here.” Her breath came easier and she was starting to feel better. Pulling the hat off she wiped the sweat from her brow. “For awhile there I wasn’t sure I was going to make it.”

She untied the bundle from her belt and unwrapped her boots.

Jessica glanced up at the voice. The sun was behind the two figures rendering them indistinct shadows. “Nothing gets by you, does it?”

Now that she could see the damage she’d done to her toes they began to throb with pain. She eased her socks over them and carefully pulled her boots back on. “Look, I’m grateful for your help and all, and I’d be more than happy to thank you properly later, but I’ve had a truly horrendous day and I just want to get home and climb into a nice hot tub. Could you tell me where the nearest phone is?”

Jessica pushed her hair out of her eyes and squinted up at the two shadows in front of her. “Cut the kidding. Which coast am I on, east or west?”

“This be the northern coast,” voice number two answered.

“North?” Jessica ignored the pain in her toes as she scrambled to her feet. “What do you mean, north?”

The two men in front of her glanced at each other. “We stand upon Death’s Head, northern most point of the kingdom of Ghren.” The taller of the two men spoke slowly, as though to a particularly dense child.

“Now look, I’m sure you both find this very funny, but I –” Jessica stopped abruptly and stared. She pivoted slowly, eyes widening.

The landscape in front of her was wilder and greener, more breath-takingly beautiful than anything she’d ever seen outside of a National Geographic magazine. Out on the water a three masted sailing ship was coming around another point of the bay. Beyond the two men, in the distance, were the tents of a camp and beyond that the barely discernible outline of a castle.

“Are you guys filming a movie, or what?”

Now, because you've been such a lovely audience, I'm going to tell you how you can buy your very own copy of Magical Misfire:

You can buy in all formats directly from my publisher: Brazen Snake Books

You can also buy it in pretty much any format from: Smashwords

Or you can buy it from the ebook giant: Amazon

And for those of you who are financially challenged (as I so often am) there is a contest on Goodreads where you have the chance to win one of FIVE paperback copies. You can enter HERE.