Major Arcana of the Tarot - Part XIX
The Sun 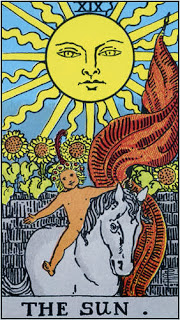 Number nineteen of the Major Arcana is The Sun. Since the dawn of man the sun has been an object of worship. It blazes with vitality, bringing light and life to all. It rises, without fail, each morning. It illuminates the world so that we can see things clearly. This is a positive card, representing elements that provide us with the confidence to make a success of everything we do. It's an image of optimism and fulfilment, the dawn that follows the darkest night.

In the Visconti-Sforza Tarot (15th century) The Sun is represented by a youth standing on one leg on what appears to be a blue cloud, floating over a green landscape. He is naked, save for a red ribbon draped over him, and appears to have small wings, the same dark blue as the cloud. In his hands he holds a red sun that is gazing upwards. The Rosenwald deck (16th century) shows a more simplistic image. The Sun is shown in the center of the card with clouds in each of the four corners that seem to be parting for it. It wears a benign expression on its face, and is surrounded by eight narrow rays and eight wider, less defined rays.

Le Soleil in the Tarot de Marseille (early 18th century)depicts two young boys standing in front of a waist high brick wall. They are dressed only in a blue cloth around the waist and are reaching towards each other. The face of the sun has a calm expression on it and is surrounded by rays that are shooting out colourful drops.

In the Tarot Soprafino, Piamontes o Milanes (1835), Il Sole shows a young man and woman walking together in a garden. They are holding hands and gazing fondly at each other. Above them the brilliant sun is breaking through the clouds - one of the few depicted without a face. In the Tarot de Oswald Wirth (1889), however, Le Soleil shows the young man and woman, naked save for cloth wrapped around their hips as they stand holding hands in a circle of what appears to be low-lying flowers or grass. There is a waist-high brick wall behind them and the sun shines down, its face staring straight ahead.

The Rider-Waite Deck shows a sun high in the sky looking outwards. In the foreground is a naked child holding a red or orange banner, sitting on a white horse. The child wears a crown or wreath with a feather sticking up out of it on his head. There is a grey wall behind them with four sunflowers growing either along the top or behind it.

The serene face of the sun is a reflection of the higher mind and is an indication of the peace of knowing oneself. The straight rays coming from it symbolize action, while the wavy rays represent vibration. The child signifies a new phase of life, representing the delight of our inner spirit when we are in tune with ourselves. He is naked, having nothing to hide. The white horse he is riding on symbolizes strength and purity of spirit. It is controlled without saddle or bridle, a sign of the perfect control between the conscious and subconscious.

There is an orange banner in the child's left hand that also represents action and vibration. It's bright and bold, a sign that a new day is dawning. Control has passed from the conscious to the subconscious. There is a wreath with a feather encircling the child's head, indicating the nearness of harvest time, the final realization and freedom from material ideals.

The four sunflowers represent the four suits of the Minor Arcana as well as the four elements. They're also an indication of life and the fruitfulness of the spirit under the sustaining sun. These sunflowers are not turned towards the sun, but to the child on the horse, directing their energy towards him and the power he holds over the material world.

The wall behind the child and horse is symbolic of holding back. It is a reminder that growth cannot be accomplished if we are closed off to it, and also that no matter how bad our situation seems there is always an opportunity to break through the walls impeding us. The colour grey indicates wisdom.

This is a card of break throughs. It's sending us a clear message that our hard work is about to pay off and we're about to come out of the dark. We've reached a point of clarity and understanding and are ready for a new beginning.

Life is good. The sun is shining and you're well on your way to achieving your goals. Your positive energy will get you through the troubled times and help you to succeed. You can expect to feel invigorated and bursting with enthusiasm. Get back to the simple pleasures and enjoy spending time with loved ones. Any obstacles you may encounter at this time are only temporary. This is a good time to start something new.

When The Sun appears in the past position, it's an indication that you're an optimistic, take-charge person who makes the most of every situation. You probably had a wonderful childhood. The successes you've achieved in the past have set the stage for your current course of a brilliant future.

In the present position there's an indication of a new friendship or a relationship that will lead to lasting happiness. You can get exactly what you want at this time - don't give up and you'll be led to success. When The Sun is in your future, it's an indication that you're on the right path. Take full advantage of this - you are on a path leading to enlightenment. The future is filled with possibilities.