Early in the summer, or maybe it was the spring, I promised a friend that when she took her vacation this year I'd go on a road trip with her. Well, her vacation was last week and our road trip took us through Prince Edward County, specifically along the Wine Tasting Route. You can click on the picture to make it bigger. 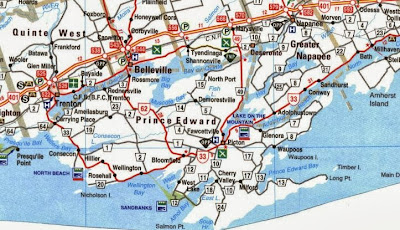 I have to admit, I've lived in this area my whole life, and although I've been to Sandbanks National Park, I've never explored the rest of the penninsula. I didn't even know there was a Wine Tasting Route, nor a Gallery Route. Not only are there wineries all over the place, there's a plethora of art galleries as well. Who knew? Anyway, since my friend is into wine and not art, we stopped at a winery. 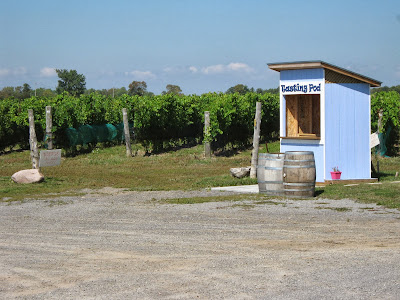 Now, I'm all for tasting wine, but these places charged a buck a taste (which was usually a thimbleful of wine in the bottom of a wine glass), although they waved the fee if you bought a bottle.

I have to say, this was a really picturesque region. I didn't take nearly as many pictures as I would have liked, but one I did get was of a ferry you could take for free across some stretch of water. Okay, I confess. I'm not sure what body of water this is. All I remember is that it was free. :-) 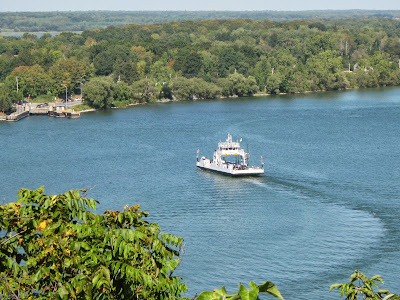 Now we come to the real point of this trip. My friend and her husband (who passed away a few years ago) used to come up here on a regular basis and they'd always stop at Lake On the Mountain. To my mind it's not much of a mountain, but it is well above sea level. 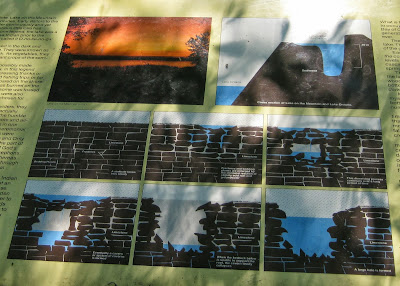 Of course I prefer the local legend regarding the lake. It was a sacred place to the Mohawk Indians, who called it O-no-ke-no-ga (Lake of the Gods). Spirits known as the Three Sisters - corn, beans and squash (named for the most important crops) - were believed to dwell at the bottom of the lake. The Mowhawks made pilgrimages to the lake to make offerings to the Three Sisters to express thanks and ask for blessings. A ceremonial fire was prepared on the shore and sacred tobacco was offered. Some was burned on the fire, some was scattered on the water of the lake, and some was tossed over the cliff into the bay below.

The Three Sisters didn't actually receive the offerings, they carried them, along with messages of thanks and praise, to the Great Creator H-wen-e-yo. The presence of the Three Sisters was merely a way for the Mowhawks to communicate with God. 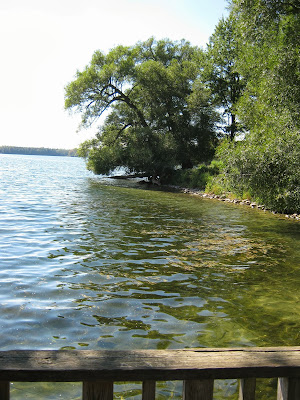 My favorite legend of the lake involves a young Indian brave who was in love with the daughter of an important chief. She returned his love and they eloped, with the father giving chase. They were overtaken at O-no-ke-no-ga. The maiden threw herself over the falls; the brave dove into the lake, never to surface. Because of their desecration of the holy waters, the gods imprisoned their spirits. The maiden was to linger around the waterfall, while the brave was to remain at the bottom of the lake. But the Three Sisters took pity on the lovers. They showed the brave a leak in the thin, limestone wall containing the lake. The brave worried at the leak until he was able to squeeze through and rejoin his lover. In the spring, the hole in the lake wall can still be seen as water gushes through creating a waterfall. It's become a symbol of lovers overcoming difficulties. 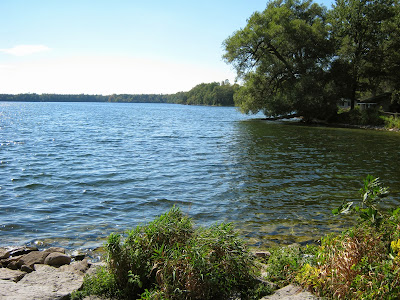 Our final stop on our road trip was the winery of Waupoos. Don't you just love that name? This is actually a fairly new winery - it's only been open since 2001. But they have a huge variety of wine and it's all reasonably priced. Had we known ahead of time, we could have taken a full tour of their facility. It includes learning the steps of wine-making and free samples of wine. Yum! 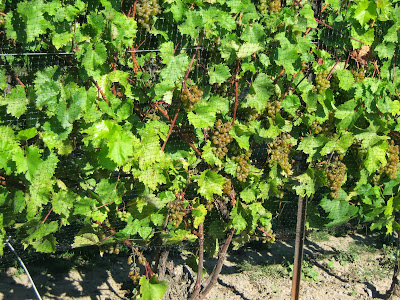 And that concludes my road trip. :-)

I'd definitely like to go back again, only this time I'd like to plan it out a little better. We were pretty much winging it and half the time we had no idea where we were going. LOL It's a very picturesque area and I think it's a trip that requires more than one day to do it justice.