Major Arcana of the Tarot - Part XXI
The World 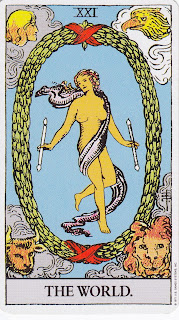 At number twenty-one, The World is the last card in the Major Arcana, and as such represents the end of a cycle, with a pause before we begin the next one. We've achieved contentment and fulfillment. It's the coming together of all the elements necessary for us to receive the satisfaction and success that we've been striving for.

The early Italian decks showed this card with some kind of sphere or circle on it, not just representing the Earth, but the universe as well. The Italian word "Mondo" can actually mean "the universe" as well as "the world."

The Tarocchino di Mitelli deck shows a kneeling man with his back to us holding a large blue sphere on his shoulder, while the Visconti-Sfroza Tarot has two angels holding up a sphere with a walled city inside it. In the Cary-Yale Visconti Tarot a woman with outstretched hands is shown in the upper part of the card, while below her is shown an elaborate scene of a village with ships in the background and a knight and a fishing boat in the foreground.

The Rosenwald Tarot shows the World as number twenty, with an angel standing on top of a wreath-like sphere that has the picture of a village within it. In Tarot de Marseille, Le Monde shows a woman holding a staff in her right hand inside an oval wreath in the center of the card, while figures appear in the four corners representing the four elements.

In some decks the wreath is the worm Ouroborous biting its own tail. In the Thoth Tarot this card is called "The Universe." In the Rider-Waite deck, a woman clad only in a flowing scarf floats freely in the center of the card. She holds a baton in each hand and is surrounded by a green wreath. There is a head in each of the four corners - lion, bull, man, and eagle.

The figure at the center of this card has been call the World Dancer, who's rejoicing in the conclusion of the journey, celebrating not only the completion but the new beginnings to come. One of her legs is straight while the other is crossed at a right angle, symbolic of the cross-roads that has been reached. The batons she holds in her hands are the sacred scrolls of knowledge, representing balance and evolution.

The thick, green wreath is symbolic of victory, also of protection, peace, and accomplishment. The red ribbons at the top and bottom of the wreath are lemniscates, or infinity symbols, assuring us that we are infinitely rewarded for any positive actions we take to improve ourselves as well as those around us.

The four figures appearing in the corners are similar to those on the Wheel of Fortune card. They represent the fixed signs of the Zodiac - Leo, Taurus, Aquarius, and Scorpio. These, in turn, are symbolic of the four elements, the four points of the compass, the four seasons, and the four corners of the universe. The lack of any solid ground on this card is symbolic of the feeling you get when you've conquered your world.

To be truly happy we must feel connected to what is around us. We need to know what our goals are and that we are moving towards them to feel a sense of accomplishment. The World represents this feeling. It's a positive sign that you're in the right place to realize your dreams; it's a card of completion and fulfillment.

You've reached the end of a journey, completed one of the major cycles of life. Any challenges you've faced along the way have only made you stronger, if not wiser. The World symbolizes the new beginnings that are now open to you because this cycle is complete. If you have not quite reached this point of completion, never fear. You are very close. Look back at all you've accomplished and how far you've come already. You should be able to see your progress and the impact you've had. Everything is starting to fall into place.

Even those around you feel you deserve the happiness this card brings. The world is your oyster - perhaps you need to broaden your horizons through travel to reach your goals. The energy of this card is so positive that even if it's surrounded by negative cards, it only means a delay before reaching your journey's end. Keep your mind open to the greater possibilities out there.

When The World appears in the past position of a Tarot Spread, it means that whatever you are experiencing now has roots in something you accomplished earlier on. But while the foundation on which you now stand is rooted in this past, you need to move on. Do not fall into the trap of living in the past.

In the present position, The World indicates there's a need to take care that you do not sabotage yourself because of your distrust of your current happy state of affairs. When things begin to go your way, it can lead to stress and anxiety because this is not a natural state for you.

The World in the future position indicates that you need to keep your dreams alive. This is not the time to be questioning your abilities. The universe is telling you to move forward with confidence. You have more to offer than you realize.