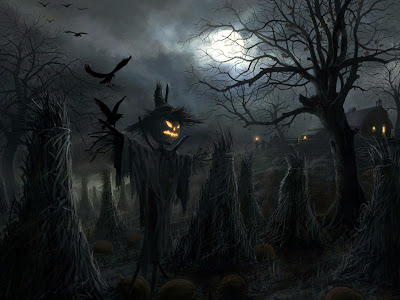 On random facts about Halloween . . .

I don't know about you, but Halloween is one of my favourite holidays. When I was a kid it was because I got to dress up and go begging for candy. But as I got older I started to appreciate Halloween for its supernatural aspects and its traditions. So for the next few rambles I thought I'd share some of the Halloween lore I've collected over the years.

Halloween is the number two holiday in terms of commercial success (Christmas, of course, is number one). Over four billion dollars is spent annually during the Halloween season. Half of that is spent on candy.

Signs of a werewolf are a unibrow, hairy palms, tattoos, and a long middle finger.

If you see a spider on Halloween, it is the spirit of a loved one watching over you.

People of Hong Kong believe that spirits roam the world on the whole Halloween day. Some people burn pictures of fruit and money. They believe that this will reach the spirit world and comfort the ghosts of the dead.

Chocolate bars are the most popular treat to give trick-or-treaters.

In Britain, people believed that the Devil was a nut-gatherer. At Halloween, nuts were used as magic charms.

It is said if you go to a crossroads on Halloween night and listen to the wind, it will tell you your future for the next year.

On this day in Portugal, people have feasts of wine and chestnuts in the cemetery. Also special sugar cakes are baked with cinnamon and herb flavoring.

If a person has an extreme, intense, or irrational fear of Halloween, they may be suffering from a condition known as samhainophobia.

If a girl puts a sprig of rosemary herb and a silver sixpence under her pillow on Halloween night, she will see her future husband in a dream.

In about 1 in 4 autopsies, a major disease is discovered that was previously undetected.

There really are vampire bats, but they're not from Transylvania. They live in Central and South America and feed on the blood of cattle, horses and birds.

The people of Poland believe that spirits roam on this day so they leave their doors and windows open to welcome the visiting spirits.

The movie "Halloween" was made in only 21 days in 1978 on a very limited budget. It was shot in the spring and used fake autumn leaves.

Traditionally, a Halloween Cake was baked with a thimble inside. Whoever got the thimble in their slice was to be unfortunate in love for the next year.

Tootsie Rolls were the first wrapped penny candy in America.

In China, Halloween is known as Teng Chieh. People place food and water in front of their dead relatives and friends to pay respect.

If you want to see a witch on Halloween night, you need to wear your clothes inside out and walk backwards.

Some believe if you catch a snail on Halloween night and lock it into a flat dish, then in the morning you will see the first letter of your sweetheart written in the snail's slime.

Many people used to believe that owls swooped down to eat the souls of the dying. If they heard an owl hooting, they would become frightened. A common remedy was thought to be turning your pockets inside out and you would be safe.

Bobbing for apples is thought to have originated from the roman harvest festival that honors Pamona, the goddess of fruit trees.

The ancient Celts thought that spirits and ghosts roamed the countryside on Halloween night. They began wearing masks and costumes to avoid being recognized as human.

And while you're in the mood for Halloween, don't forget to check out Alex Westhaven's Month O'Screams. There's stories, book excerpts, author interviews . . . something for everyone! And you have a chance to win some great prizes, just by leaving a comment or signing the giveaway sheet if you're shy.