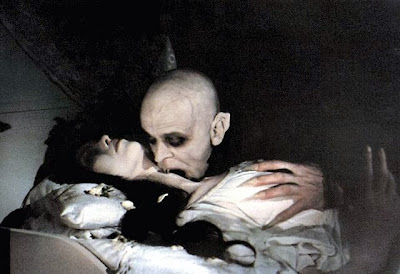 The notion of vampirism has existed for millennia; cultures such as the Mesopotamians, Hebrews, Ancient Greeks, and Romans had tales of demons and spirits which are considered precursors to modern vampires. Almost every nation has associated blood drinking with some kind of revenant or demon, or in some cases a deity.

The Persians were one of the first civilizations to have tales of blood drinking demons: creatures attempting to drink blood from men were depicted on excavated pottery shards. Ancient Babylonia had tales of the mythical Lilitu, giving rise to Lilith and her daughters the Lilu from Hebrew demonology. Lilitu was considered a demon and was often depicted as subsisting on the blood of babies. However, the Jewish counterparts were said to feast on both men and women, as well as newborns.

Ancient Greek and Roman mythology described the Empusae, Lamia, and the striges. Over time the first two terms became general words to describe witches and demons respectively. Empusa was the daughter of the goddess Hecate and was described as a demonic, bronze footed creature. She feasted on blood by transforming into a young woman and seducing men as they slept before drinking their blood.

Lamia preyed on young children in their beds at night, sucking their blood. Like Lamia, the striges, feasted on children, but also preyed on young men. They were described as having the bodies of crows or birds in general, and were later incorporated into Roman mythology as strix, a kind of nocturnal bird that fed on human flesh and blood.

The natives of Slavic countries believed that ways of becoming a Vampire included being conceived on a certain day, being buried incorrectly, being born with a caul, teeth, or tail, or an irregular death. Preventative measures included placing a crucifix in the coffin, blocks under the chin to prevent the body from eating the shroud, nailing clothes to coffin walls for the same reason, placing millet or poppy seeds in the grave, or piercing the body with thorns or stakes.

Romanian vampires are called Strigoi based on the Roman term strix for screech owl which also came to mean demon or witch. There are two different types of Strigoi. Strigoi vii are live witches who will become vampires after death. They can send out their soul at night to meet with other witches or with Strigoi Mort who are dead vampires. The Strigoi Mort are the reanimated bodies which return to suck the blood of family, livestock, and neighbours.

One Gypsy vampire was called a mullo (one who is dead). This vampire was believed to return and do malicious things and/or suck the blood of a person, usually a relative who had caused their death, not properly observed the burial ceremonies, or who kept the deceased's possessions instead of destroying them as was proper.

Female vampires could return, lead a normal life and even marry but would exhaust the husband. Anyone who had a hideous appearance, was missing a finger, or had animal appendages, etc. was believed to be a vampire. Even plants or dogs, cats, or farm animals could become vampires. India has many mythical vampire figures. The Bhuta is the soul of a man who died an untimely death. It wandered around animating dead bodies at night and attacked the living like a ghoul. In northern India could be found the Brahmaparusha, a vampire like creature with a head encircled by intestines and a skull from which it drank blood.

The most famous Indian vampire is Kali who had fangs, wore a garland of corpses or skulls and had four arms. Her temples were near the cremation grounds. She and the goddess Durga battled the demon Raktabija who could reproduce himself from each drop of blood spilled. Kali drank all his blood so none was spilled, thereby winning the battle and killing Raktabija.

Various regions of Africa have folkloric tales of beings with vampiric abilities: in West Africa the Ashanti people tell of the iron toothed and tree dwelling Asanbosam, and the Ewe people of the Adze, which can take the form of a firefly and hunts children. The eastern Cape region has the Impundulu, which can take the form of a large taloned bird and can summon thunder and lightning, and the Betsileo people of Madagascar tell of the Ramanga, an outlaw or living vampire who drinks the blood and eats the nail clippings of nobles.

The Loogaroo is an example of how a vampire belief can result from a combination of beliefs, here a mixture of French and African Vodu or voodoo. The term Loogaroo comes from the French loup garou (meaning werewolf) and is common in the culture of Mauritius. The Loogaroo is able to shed its skin, turning into a vampiric fireball and gains access to the home of its victim through keyholes. They suck the blood of their victims through their arms or legs but if they take too much the victim will become a Loogaroo as well.

Similar female monsters are the Soucouyant of Trinidad, and the Tunda and Patasola of Colombian folklore, while the Mapuche of southern Chile have the bloodsucking snake known as the Peuchen. Aloe vera hung backwards behind or near a door was thought to ward off vampiric beings in South American superstition. Aztec mythology described tales of the Cihuateteo, skeletal faced spirits of those who died in childbirth who stole children and entered into sexual liaisons with the living, driving them mad.

The Bhuta or Prét is the soul of a man who died an untimely death. It wanders around animating dead bodies at night, attacking the living much like a ghoul. In northern India, there is the BrahmarakShasa, a vampire like creature with a head encircled by intestines and a skull from which it drank blood. The Nukekubi is a being whose head and neck detach from its body to fly about seeking human prey at night.

In the Philippines, Malaysia and Indonesia we have the Mandurugo, which takes the form of an attractive girl by day, and develops wings and a long, hollow, thread like tongue by night. The tongue is used to suck up blood from a sleeping victim. The Manananggal is described as being an older, beautiful woman capable of severing its upper torso in order to fly into the night with huge bat like wings and prey on unsuspecting, sleeping pregnant women in their homes. They use an elongated proboscis like tongue to suck fetuses off these pregnant women. They also prefer to eat entrails (specifically the heart and the liver) and the phlegm of sick people.

The Malaysian Penanggalan may be either a beautiful old or young woman who obtained her beauty through the active use of black magic or other unnatural means, and is most commonly described in local folklores to be dark or demonic in nature. She is able to detach her fanged head which flies around in the night looking for blood, typically from pregnant women. Malaysians would hang jeruju (thistles) around the doors and windows of houses, hoping the Penanggalan would not enter for fear of catching its intestines on the thorns.

The Leyak is a similar being from Balinese folklore. A Kuntilanak or Matianak in Indonesia, or Pontianak or Langsuir in Malaysia, is a woman who died during childbirth and became undead, seeking revenge and terrorizing villages. She appeared as an attractive woman with long black hair that covered a hole in the back of her neck, which she sucked the blood of children with. Filling the hole with her hair would drive her off. Corpses had their mouths filled with glass beads, eggs under each armpit, and needles in their palms to prevent them from becoming Langsuir.

Jiang Shi (literally "stiff corpse"), sometimes called "Chinese vampires" by Westerners, are reanimated corpses that hop around, killing living creatures to absorb life essence (qì) from their victims. They are said to be created when a person's soul (pò) fails to leave the deceased's body. One unusual feature of this vampire is its greenish white furry skin, perhaps derived from fungus or mould growing on corpses.

So if you meet a vampire this Hallowe’en, be sure to ask them what kind they are and let me know, before they bite you. :-)