Signs of the Zodiac - Introduction 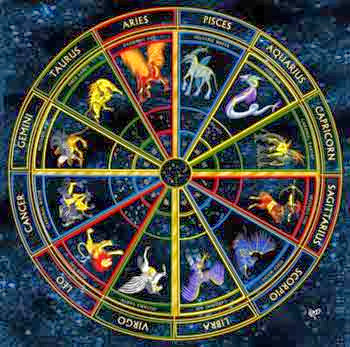 One of the most well known forms of divination is astrology, the prediction of personal fortune through the position of the planets and stars. The band of sky through which the sun makes its annual path through the stars is called the zodiac. This is divided into twelve thirty degree sections called houses, each represented by a different sign of the zodiac.

Whether you're a believer or not, I'm sure most people are familiar with the twelve signs of the Zodiac - Aries, Taurus, Gemini, Cancer, Leo, Virgo, Libra, Scorpio, Sagittarius, Capricorn, Aquarius, and Pisces.

Each sign has its own symbol and its own characteristics. As well, they're each associated with a particular part of the body. From top to bottom they are as follows:

The term zodiac derives from Latin zōdiacus, which in its turn comes from the Greek ζῳδιακὸς κύκλος (zōdiakos kuklos), meaning circle of animals.

Astrology is considered to be both a science and an art. It has scientific status because it requires mathematics and an understanding of Astronomy, and art because interpretation is necessary to bring the different aspects together.

Ancient star-gazers studied the stars and observed how they followed a cycle every year. The Zodiac was originally a natural agricultural calendar that dated the sowing of crops, harvesting, etc, by the rising and setting of the stars.

Interest in astrology waned with the rise of Christianity, but became popular again when Nostradamus published his book of prophecies in 1555.

More than one third of all Americans believe in astrology.

Astrologers claim that the moon has the same effect upon humans, as it does upon the ocean. If the moon can affect the huge tides it cannot fail to affect the human body, which consists of 75 per cent water.

Adolf Hitler is thought to have used an Astrologer throughout the Second World War.

Join me here next week to explore the first sign of the Zodiac, Aries.