Seriously? After all this time and you don't know what NaNo's all about?

The official website, however, says:
"National Novel Writing Month (NaNoWriMo) is a fun, seat-of-your-pants approach to creative writing. On November 1, participants begin working towards the goal of writing a 50,000-word novel by 11:59 p.m. on November 30. Valuing enthusiasm, determination, and a deadline, NaNoWriMo is for anyone who has ever thought fleetingly about writing a novel."

There are thousands of participants all over the world and every year the number increases. I tried to find the numbers, but I couldn't find the link. But trust me, there's a lot of us out there.

If you're interested in learning more, click here: NaNoWriMo. And don't forget, it's never too late to sign up. Take it from someone who changed stories one week and 12,000 words in one year. And yes, I went on to win with my new idea. :-)

And if you think you'd like to give it a try, here are some great Tips For the NaNoWriMo Newbie by my friend and fellow NaNo participant, Jamie Debree.

For the rest of the month, I'll give you an update on how I'm doing each Friday, and maybe an excerpt to keep me honest. ;-)

Of course since this is the first day of NaNo I really don't have much to offer yet, but I do have a brief description and my NaNo cover. 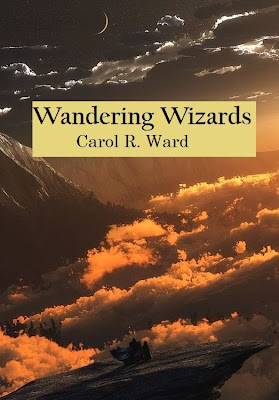 The third in the Moonstone Chronicles, Wandering Wizards continues the tale of Jessica O'Connell as she stumbles her way through the magical realm her best friend Howard accidentally teleported her to, accompanied by the ex-prince Dominick and the bard Sebastian. They're on their way to the Southlands where Jessica's father and grandfather are awaiting a family reunion. Too bad Jessica doesn't know they're family. She thinks they're going there to get help to send her back home.

Meanwhile, Jessica's faery grandmother (literally) sends a powerful amulet to Howard who uses it in a spell that will allow him to travel to the magical realm. Unfortunately, Jessica's roommate Ellen stops in just as he sets the spell in motion and she's caught up in it as well. With the help of half of a moonstone pendant that once belonged to Jessica's mother and an elf named Kaelan, Howard and Ellen journey southwards in hopes of meeting up with Jessica.