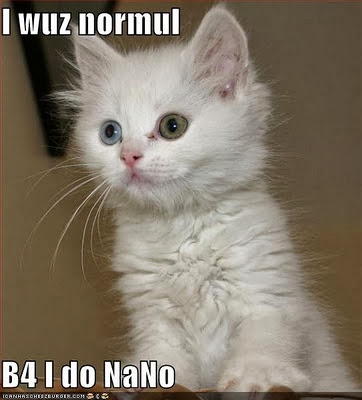 Week One of NaNoWriMo is officially over and as usual, I'm woefully behind. I truly thought this year would be different and I was going to stay on top of things, but I should have known better. :-)

However, I seem to be over the worst of the mega-death-cold-from-hell and I'm slowly catching up on my wordage. Unfortunately, I seem to be the most productive after 1 a.m. Oh, well. Sleep is for the weak!

This excerpt comes from the very beginning of Wandering Wizards, so it's pretty self-explanatory. Just bear in mind when you're reading that this is NaNo and the idea is to write quickly, not prettily. So this is totally unedited. ;-)

Howard stared at the object that rest dead center on his work table. It looked like an adder stone, or hag stone. He'd awoken to the sound of a thunderclap and the vision of that very object. It had hovered over his bed and then floated slowly out of the room. He'd followed it, and only when it settled gently on his work table did he realize he wasn't dreaming.

A few months ago, Howard would have been horrified at objects floating around his apartment and disembodied voices talking to him. He would thought seriously about getting some psychiatric help.

With a yawn he went over to the book case and pulled down the bowl he'd been using for scrying. It had been several days since he'd last used it - when he'd finally given up on being able to contact his friend Jessica.

He fingered the moonstone pendant hanging around his neck as he waited for the oil in the bowl to settle. The pendant had been his only means of verbal communication with Jessica. It was actually in two parts, but hers had been lost somewhere in the magical realm. At first he'd been able to use the scrying bowl to keep tabs on her - even if they couldn't talk he could at least see that she was all right, but it was getting harder and harder to do so.

The oil in the bowl churned and then cleared to show the face of a beautiful woman with brilliant blue eyes, silver hair, and slender, pointed ears.

The Lady Aracelia was Jessica's fairy grandmother, or to be more precise, her Elven grandmother. Jessica, it turned out, was not a native of earth, but of the magical realm. She'd been sent to earth as a baby for her own safety and had grown up not knowing she was adopted nor her magical heritage.

"Howard, you are looking well, my friend."

"Ah, thank you. You're looking well too. How may I help you?"

"Paran has told me what a promising student of magic you are, but that he find's your world's lack of magic most frustrating."

"As do I," Howard admitted. Truthfully, he found it far more than just frustrating.

"I have sent you a talisman imbued with elven magic that should aid you in your lessons. It should last for several months, at which point you have only to contact me and I will re-energize it for you."

"I don't know what to say," Howard said, astonished. "Your generosity humbles me."

She smiled gently. "You have been a good friend to my granddaughter and I feel responsible for the loss of your ability to do more than spy on her through the bowl."

It had, in fact, been totally her fault. She arranged for Jessica's half of the amulet to be stolen in order to draw Jessica into the Elven Realm to test her magical abilities. Unfortunately, the amulet, along with the young elf who'd been drafted to steal it, had been lost.

"It is my hope that you will once again be able to communicate with Jessica."

"Right now it's probably just as well I can't," Howard said with a grin. "I think Jessica and Dominick are still in the honeymoon phase of their relationship."

Howard searched for the proper words to explain. "It's a custom here that after two people get married they take a trip together to get away from everyone else and just enjoy each other's company. It's called a honeymoon and the term was extended to mean that period of time in a new relationship when two people are pretty much so wrapped up in each other they're oblivious to anything else."

Aracelia laughed, the sound like crystal bells. "A most interesting phrase to be sure. Yes, I can see that it does indeed apply to my granddaughter."

"Have you thought of making contact with her yourself?"

The elf shook her head. "I promised Thackery I would not. Not until she has been told of her parentage."

"He doesn't trust you to keep his secret."

"No, he does not. And he is probably right in doing so. I do not believe it is wise to keep the truth from her."

"I don't believe it either," Howard agreed. "He doesn't know Jess like I do. She's not going to be happy at all when she finds out what's going on. And she's going to like it even less when she finds out everyone around her knew the truth and never told her."