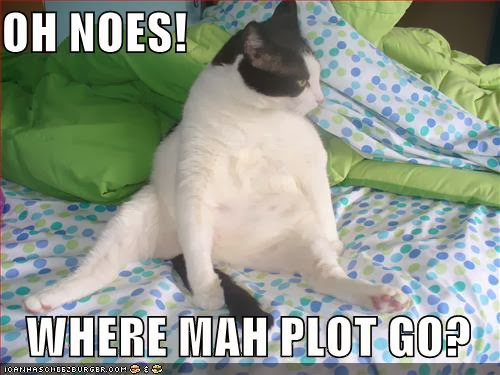 Wherever the mega-death-cold-from-hell went, it appears to have taken my energy and ambition with it.

While I have been getting more writing done during the day (so I can be getting to bed earlier) it's still rather sporadic. One day I'll do a couple of thousand words, the next it'll be a couple of hundred. Today is the halfway point for NaNoWriMo, which means I should be at 25,000 words.

As you can see by my little word count widget on the left, I'm no where near 25,000. But the month's not done yet and anything can happen. So don't count me out yet. ;-)

Again, my NaNo excerpt is pretty self-explanatory. Ellen, Howard, Sebastian and Kaelan are about to undertake a quest for the Lady Aracelia, an elf of great power and influence. But first they need a good night's sleep. Unfortunately, sleep is not coming easily for a couple of them.

That night, Ellen had trouble sleeping. The bed was more than comfortable enough, but she kept tossing and turning anyway. Finally, she gave up. Putting on the too-long robe she'd been given (which matched the too long, silk night gown), she went out into the garden hoping the fresh air would make her sleepy.

Not that she saw the logic in that really. Fresh air should actually make her feel more wide awake, shouldn't it? But it was better than laying in bed, staring up at the ceiling.

A cup of tea probably would have made more sense, but she wasn't really sure which way the kitchen was and in any case, she didn't really feel comfortable rooting around in someone else's kitchen. Or worse, waking one of the servants up who would then insist on making it for her.

She wondered if Aracelia often had trouble sleeping too. There were a great many night blooming flowers in the garden. There was just a hint of a breeze, but the evening was surprisingly warm. She had to wonder if it was really that warm, or if it was some magical aspect to do with the garden.

Coming to a spot where there were stone benches surrounding a small pond, Ellen sat down. There was a life-like statue of a satyr like creature in the center of the water, legs poised for dance, a pan flute held to its lips, ready to play. Was it taken from Earth mythology, or was Earth mythology based on this figure? For all she knew this could be a real satyr, turned to stone by magic.

Magic. Here she was in the magical world that was Jessica's true home. Her friends, because over the last few months Howard had truly been her friend, both had magic coming out the ying yang. But what about her? What was her place in this world? Not that she even wanted one. Hopefully Jessica's family would be able to figure out how to send her home. If they could make it there. Just how far was the southlands from where they were now?

There was a full moon tonight and beneath its light she could see multicoloured fish swimming amongst the water lilies. Apparently they didn't have racoons here. Or maybe there was a magic spell in place to keep them away. The thought made her smile.

Her mother had persuaded her father to put a koi pond in their back yard and every year she fought with the racoons to keep her fish safe. Last year she'd finally discouraged the racoons from coming back but a heron discovered the pond and three nights later the fish were completely gone.

A slight scuff on the path made her turn her head. It was without surprise that she saw the elf Kaelan approaching. There was something about him . . . it wasn't just that he was so beautiful, or that he seemed to find her fascinating. It was something else. Something she couldn't put her finger on. Or maybe the truth was she didn't want to put her finger on it.

Damn. Even his voice was beautiful.

"It's all right," she told him. "You're not intruding. And actually, I'd kind of like the company."

He sat down beside her on the bench leaving just the right amount of space between them. Once seated they were on more of an even level, so to speak.

"Are you having trouble sleeping too?" she asked.

"Yes," he answered honestly. "I cannot help but wonder what has happened to the elves of the Wild Woods Realm. Different possibilities keep running through my mind."

"And each one worse than the last," Ellen finished for him.

"This is true. I thought perhaps some time in the garden might clear my head."

"No!" The flush on his face was apparent even in the moonlight. "That is, I would much rather talk with you than be alone with my thoughts. But tell me, Mistress Ellen, what thoughts were you thinking that had you looking so serious?"

"It's just Ellen," she told him. "And I was thinking it seems that everyone else is just dripping with magic - everyone except me. I feel the odd man out."

"Really?" She looked surprised. "I thought elves were magic in themselves?"

He smiled at her. "Alas, no. And it is this lack that has made me the odd man out as well. I have three brothers and a sister, all, as you say, dripping with magic."

She thought about it for a moment. "It must have made it very hard, growing up in such a magical household."