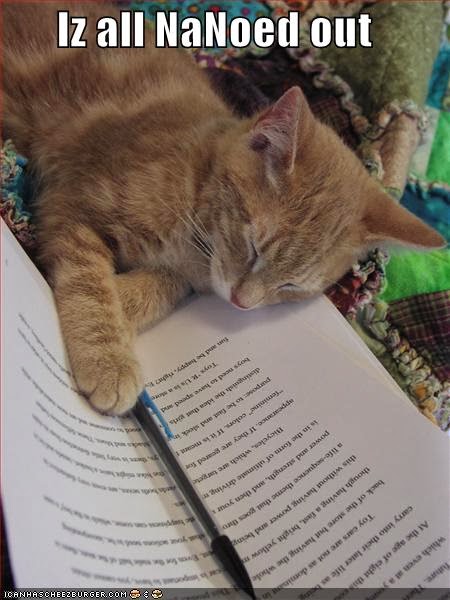 One more day left and NaNo is done for another year.

For some reason I always do well with a deadline, and NaNo is no exception. I've been putting my nose to the grindstone this week and it's paid off. As of the writing of this post (late Thursday night) I'm only 1500 words away from the 50,000 word goal. I think it's safe to assume I can manage 1500 words over the next two days.

So . . .what are some of the things I've learned from this year's NaNo?

First, and most important, DO NOT start book three of a series before you have book two written. It will cause much floundering as you try and figure out the starting point for your characters.

Second, an occasional pajama day can really up the word count.

And three, it is possible to write an entire novel while sitting in a recliner - even if you do have a home office. :-)

This, the final week's excerpt, is a little on the long side, but I really couldn't figure out where to cut it and I'm too lazy to find a different scene. Ellen, Howard, Sebastian, and Kaelan have reached their destination, the Wild Woods Elven Realm. Here they meet Kaelan's brother, Diarmad who's a bit of an ass hat. In this scene, Diarmad has just sent Kaelan off to do the washing up after supper.

Ellen started to rise. "Maybe I should go help him."

"Nonsense," Diarmad said, taking her hand to stop her. "He'll be fine on his own. While I, on the other hand, would be desolate at your loss."

"You don't even know me," she said, amused in spite of herself. He really was pulling out all the stops.

"Ah, but that can be easily mended. You have only to tell me about yourself, beautiful Ellen. What brings you to the Wild Woods Realm in the company in such a poor guard as my brother?"

Ellen shot a glance towards Howard and Sebastian. The bard shook his head slightly at her. Right. Charismatic as Diarmad was, he was still an unknown.

"We're here as a favour to a friend, and Kaelan came highly recommended."

He offered her the wine skin again but she shook her head.

"And what do you do, when you're not roaming around in ghostly elven realms playing pranks on your brother?"

Diarmad threw back his head and laughed. "You have to admit, he is an easy target. His lack of magic makes it so simple. Like my little brother, I'm a guard. But I'm one of the king's guards."

"Kaelan mentioned he has more than one sibling," Sebastian said curiously. "Are all of you guards or soldiers?"

"Not at all," Diaramad said. "Our brother Aodhfin is a trader, while Eoghan and Brogan follow in father's trade. Something else poor Kaelan lacks talent for."

Ellen was sure that last comment was tacked on for Kaelan's benefit. He'd just returned to the clearing and was hovering on the edge. It broke her heart, but she wasn't sure what she could say that wouldn't make things worse for him.

"I'm pretty sure Kaelan mentioned as sister as well," Howard said, having not noticed Kaelan standing in the shadows. "What does she do?"

"Iana?" Diarmad gave a dismissive shrug. "She need do nothing. There are servants for that."

Something of Ellen's opinion of that must have shown on her face, because Diarmad quickly changed the topic.

"Wild Woods is considered one of the most beautiful of all the elven realms," he told her. "The full moon is very bright tonight, perfect for a stroll along the water."

Ellen smiled. "I believe you're right, Diarmad," she said. "A walk would be perfect. Kaelan, would you care to join me?" She rose gracefully to her feet and held out her hand.

Kaelan was better at hiding his surprise. His smile was slow, but one hundred percent sincere. "It would be my pleasure to be your escort."

He took her hand and together they disappeared down the path to the stream.

Sebastian handed Diarmad the wine skin. "There's no divining a woman's mind," he said. "Might as well have a drink."


Kaelan and Ellen were quiet as they followed the path to the stream, but Kaelan did not stop there. He led her along the bank until the stream widened into a waterfall fed pond. The waterfall itself was only a few feet high, the source lost in a rocky outcrop. A handful of night blooming water lilies bobbed gently around the edges of the pond while the moonlight sparkled on the water.

"This is so beautiful!" Ellen exclaimed.

"My grandmother used to bring me here for picnics when I was young," Kaelan said. He led her over to a stone bench that was half-hidden by ferns.

Once they were seated, Ellen said, "Your brother is really something, isn't he?"

Kaelan's expressive face grew still as he shrugged carelessly. "Yes, many are drawn to him."

She turned to look at him. "That wasn't meant to be a compliment."

"Was he born that big of a jerk, or does he have to work at it?" He looked back at her, eyes wide. "Kaelan, are you so used to the way he treats you that you don't even notice it any more?"

She took his hand, cradling it in hers. "I hate to tell you this, but your brother is a pompous ass and the way he likes to belittle you makes me want to thump him with one of our ironwood staffs."

Kaelan looked searchingly into her eyes for a moment, and then leaned in and kissed her. He'd only meant it to be a light, friendly kiss, but at the first touch of her lips under his, all his good intentions evaporated.

Ellen melted into his arms. It just felt so right. Her hands seemed to have a mind of their own as they slid up his arms, across his shoulders, and buried themselves in his hair.

When they finally broke apart, they did not loosen their holds on each other.

"I did not intend for this to happen, but I cannot seem to help myself when I am alone with you."

"This really isn't the time or place for something like this," Ellen said. "Well, actually it's the perfect place and time, but you know what I mean."

"Yes, I do," he agreed, and began kissing her again.

When they returned to the camp they were both a little dishevelled looking, much to Diarmad's irritation. The fire was burning low and it was decided that they should all turn in for the night.

"Are you so fearful of my brother's intentions that you need to sleep with your sword?" Diarmad asked with a bark of laughter.

Ellen raised an eyebrow as she gave him a quelling look. "How sad that you know so little about your own brother."

At least he had the grace to look abashed.

"We're in a place where something catastrophic must have happened. Add that to the fact that the barrier's been weakened to the point where I don't believe it can prevent those with ill intentions from entering, and I think precautions are warranted. Better to be paranoid than sorry."

Bedroll arranged to her satisfaction, she laid down to sleep, the sword beside her.