I was all set to do a picture post about Santa's Sweatshop Workshop (aka my dining room table) today, but then something came up. Or rather down, I should say. Namely, freezing rain. 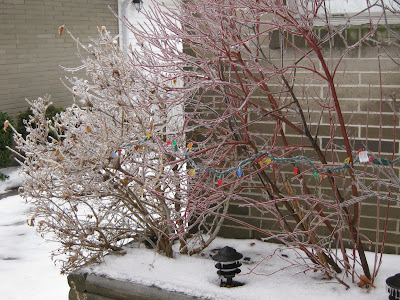 But then it turned into the Ice Storm. 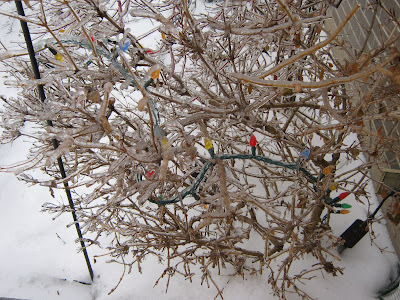 So now my sad little post about my messy dining room table has been superceded by pictures of things covered in ice. Like the name sign at the end of our driveway: 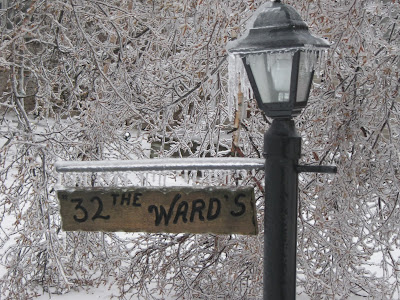 And my wind chimes hanging from the shepherd's crook on the deck: 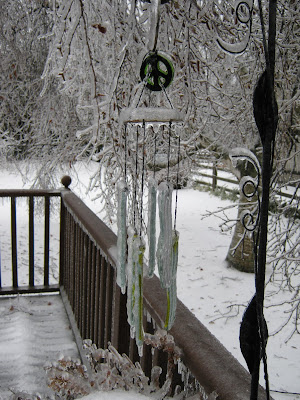 This is the view from my office window. Yes, that tree is actually weighted down with so much ice that it's touching the side of the house, just missing my window. There's more of it above, resting on the roof of the second story of our house. 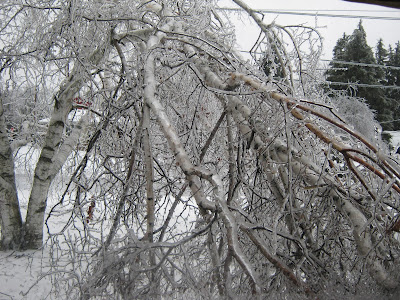 I'm actually writing this post late Sunday afternoon. Our power's been out (for the second time) for a while now, but I had the battery in my lap top fully charged. I figured I might as well get this written ahead of time and once the power's back up (knock on wood) I can schedule it to appear at the proper time. That way if/when the power goes out again it won't matter. Well, at least as far as this post goes. ;-)

The first time we lost power was Saturday night, just as I was getting ready for bed. I came out of the bathroom and there was this humming sound, and then a bright blue flash outside - like blue lightning. It did it about three times and then there was a yellow flash and the lights went out. Freaked me right out.

The power came on again in time for me to have scrambled eggs and a cup of tea for breakfast, but promptly went out again and the hubby was stuck with a sandwich for his brunch instead of the eggs and sausage he'd been looking forward to. The freezing rain has passed, but the temperature is supposed to go down and the wind is supposed to pick up, so we're not out of the woods yet. Icy Christmas anyone?

Christmas is only a couple of days away. Are you ready? I'm sure not. Still too much to do and not enough time to do it in. I was supposed to get my baking done on the weekend, but that's a little hard to do with the power out and all. I have one batch of cookies in the fridge (they're slice and bake), but the other batch I was going to make needs to be baked as soon as you make the dough. So . . .

And once Christmas is over the New Year is right behind it. One of the things I've been promising myself for ages is to revamp my Random Thoughts blog so it's more writerly. Not sure what I'll do with the Random Writings blog. It seems kind of silly to have two blogs that are showing the exact same content. I could use one for general blogging and one for writerly stuff, but do I really want to try and keep up two blogs? I don't know . . .

At any rate, don't be alarmed if you see changes to the blogs in the next couple of weeks. I'll be moving stuff around and trying things out, and hopefully I'll have everything settled down again for the first week of the new year.

Blog Stuff For the Week:
Tuesday: I was going to skip the Zodiac post this week, but the tenth sign of the Zodiac is Capricorn, which is not only my sign it's the sign for this time of the year.
Wednesday: There'll be a hunk, but Christmas music as well, seeing as it's Christmas and all. ;-)
Thursday: Chapter three of my new draft serial, Earth - book IV of the Ardraci Elementals.
Friday: Good question. I think maybe I'll do the post I was going to do today, which is my post on Santa's Sweatshop Workshop.

Other Stuff
When I'm not baking, cleaning house, and otherwise getting as much Christmas preparation done as I can, I'll be working on the edits for Water. And if time, the weather, and my schedule permits, I might even get a little recreational reading in. A little bird told me my kitty minions are getting me books for Christmas. :-)