This has been one crazy, mixed up week. Ice storms, snow storms, blue flashes, frost quakes . . . not to mention Christmas in the middle of it all. So here's the post I was supposed to do Monday, before something more interesting came up.

When I was little, I had a favorite aunt who loved doing crafts with us. I can't even begin to list the different crafts we did together, but they usually involved a lot of paper, glue, styrofoam and a myriad of found objects. Okay, the one that really sticks in my mind are the Easter pigs we made from coloured styrofoam egg cartons. She had a thing for pigs. ;-)

My aunt was slowing down considerably by the time I had a child of my own, and arthritis prevented her from doing the crafts she loved. But when my daughter was old enough, we started a tradition of doing crafts each Christmas, namely ornaments for the Christmas tree. We'd do a new one each year, making them for ourselves and enough to include in the presents to special friends and family members. This is a tradition that lasts even to this day.

It's a point of pride with me that my tree is covered with hand made decorations only. So is my daughter's. And even though she's an adult now and has a home of her own, we still make ornaments at Christmas, and at least one of them is a new one. But I'm getting ahead of myself. :-)

This is what my dining room table looked like for the two weeks preceding Christmas: 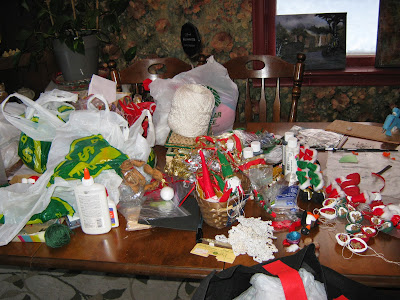 And I have to admit that by the time we were putting the finishing touches on this year's ornaments, I wanted nothing more than to just shove the whole works into a bag and store it away for next year.

This year's special ornament was Gnomes. I have to admit that my daughter's little gnome girls (in the red hats), though slightly demented looking, turned out much cuter than my gnome boys (in the green hats). 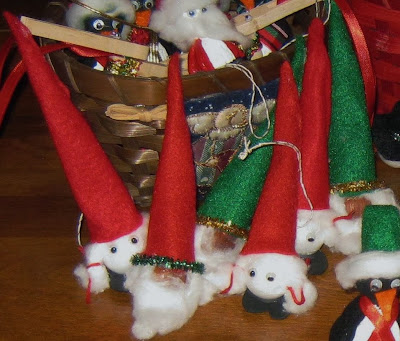 Now, to give you an idea of what kind of work goes into these ornaments, I broke down one of the ones we seem to do some of every year. Namely, the Christmas penguins. 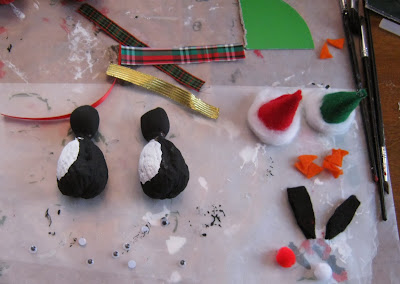 You start by gluing a hazelnut to a walnut. Then you paint it black and white. The painting takes at least a day, sometimes two, because the paint has to dry. But while the paint dries you can be putting together the hats for the penguins. See that green pie piece shaped cardboard? That's the pattern for the hat. Cut one of those out of felt and then glue along the seam, and once the glue is dry, you need to glue cotton batting around the rim and a pom pom on the top. This is not as easy as it sounds, and oh, by the way, just because a glue gun says it's low temperature it does not mean you cannot burn yourself with it. :-)

Next you'll need to cut out wings and beaks for your birds. We used to glue on feet as well, but we skipped them this year. Now your penguin is ready to assemble. First glue on the eyes, then the beak. Get it right the first time because there are no second chances when you're using a glue gun. Take a moment or two to curse the spider web like strands of glue that stick to everything in their path. Next come the wings, followed by the scarf. Last comes the hat. And there you go. A Christmas penguin.

The daughter also did snowmen heads (in very limited quantities because the hats were a real pain in the butt to do) and a fleet of sleighs. I did the penguins, the angels in a half shell, and attempted a couple of Santas. All in all a respectable variety. 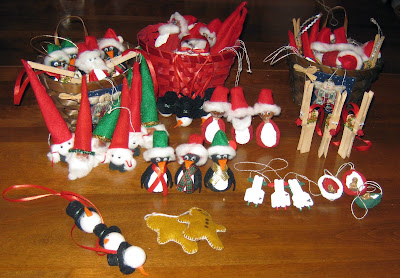 And now that I've had my dining room table back for a whole week, I'm actually looking forward to what we're going to come up with for next year. :-)