Signs of the Zodiac - Capricorn 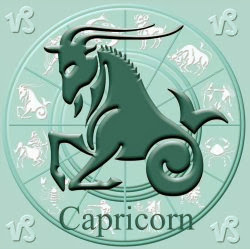 Quick facts:
You were born between December 23 and January 20
Your sign is the seagoat
Your planet is Saturn
Your element is earth
Your metal is lead
Your birthstone is the garnet
Your flower is the carnation
Your color is deep blue, black, and brown
Your body part is the knees
Your descriptive phrase is: I use, therefore I am.

Those born under the sign of Capricorn are all about hard work. They're both ambitious and determined as well as practical and realistic. But they can also be domineering and somewhat egotistical in their quest for the top. They're meticulous with details and down to earth, preferring to stay in one place for the most part. They can tend to be a tad materialistic and greedy, but never to the point of being carried away.

This sign was derived from the Babylonian god Ea, who was the god of the region described in the Bible as ‘the waters of the earth'. People born under this sign tend to be over serious, pessimistic and emotionally inhibited. They often have an economical streak, though not to the point of meanness. They are typically clear headed, self-critical and set high standards for themselves. They display economy and brevity in both composing and writing - they say what they have to say in the fewest possible words. Effective public speakers, they are shrewd and to the point. They produce the maximum effect with the minimum expense of effort and energy and always knows when and where to draw the line.

Your best matches, whether as friends, lovers or partners, are those born under the sign of Virgo and Taurus and to a lesser degree those born to Pisces and Scorpio.