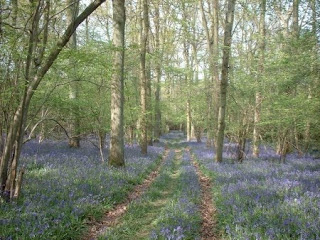 Only the desperate sought out the witch in the wood, and Grace was desperate indeed. She had been raised on a farm and had no experience in woodcraft, but still she undertook the journey deep into the heart of the clawthorn woods, keeping vigil by the waterfall for three days and two nights before the witch deigned to grant her an audience.

Grace pleaded her case passionately, if not eloquently, and was heartened when the witch listened without interruption. When Grace finally ran out of words the witch stared at her for several minutes without speaking. She tried not to fidget under that unwavering stare, but she was tired and hungry and the witch seemed to see right through to her soul.

From the mystery surrounding her, Grace had thought the witch would be a more imposing figure. It was surprising how ordinary the she was in appearance, she could have blended in with the people of the village with ease. She was neither young, nor old, face unlined and just a single streak of grey threading through her chestnut hair. But she wore her power around her like a cloak, and that alone was enough to make a smart person wary.

At last the witch held out her hand. Grace felt a surge of hope. She reached into her travel cape and pulled out the small leather pouch that held the total sum of her life’s savings, including what little she’d made from the sale of all her worldly goods. Without hesitation, she placed it in the witch’s palm.

“Look for the bluebell road,” the witch told her. “You will find what you seek at its end.”

“Bluebell road? I’ve never heard of such a place. Where—”

But the witch had already vanished.

Grace searched for a year and a day, travelling from village to village, following up any rumour that might lead to the bluebell road. She slept in stables and barns, and all too often wrapped in her cloak and huddled at the base of a tree. Sometimes she was able to trade work for a sleeping spot by the fire of a farm or tavern and a bite of bread for supper, but as the weeks slipped by these were harder to come by.

Soon the villagers began to shun her, some even driving her away with stones. Grace gleaned what she could from the forest, sometimes foraging from the edge of farmer’s fields under the cover of darkness. Her clothing became tattered and ragged and there was a hint of madness in her eyes.

When she was taken ill, a compassionate soul left her at the door to an abbey. The nuns nursed her back to a semblance of health but she was still much too thin and the wildness never quite left her gaze. They had nurtured a hope they could persuade her to stay with them, but Grace slipped away from them during the night.

She had been searching for the bluebell road for so long that for a moment she didn’t even recognize it when it appeared before her. She stopped in her tracks, mind still not fully registering what she saw.

Filtered sunlight highlighted the blue carpet beneath the trees. The track led straight ahead, vanishing into the shadows. Grace was frozen in place. Her mind flashed back to the reason she’d begun this journey, to everything she’d given up, everything she’d suffered.

“Look for the bluebell road,” the witch had told her. “You will find what you seek at its end.”

Mind clear at last, Grace lifted her foot and took the first step down the bluebell road.
Posted by C R Ward at 1:00 AM