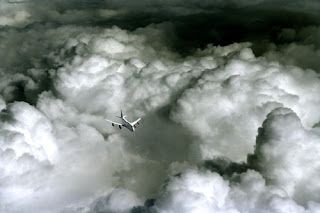 From the empty void it came, seeping into the amorphous world. It had no purpose as such, it was merely a traveller. It had journeyed a great distance and its journey left it weak, scattered. Formless, it surrounded the world it found, drawing strength wherever and however it could.

It was aware of the sparks of creation on the world below, and at first it ignored them. Of what use were such sparks to one so all encompassing? But the sparks continued, expanded, and it learned from them something new – curiosity.

The sparks were crude, incomplete, yet they gave off an energy that it found intriguing. It tried communicate with them, with wind and rain and lightning, but they lacked the means to understand. Instead they gave it many names, Shri Indra,Tarhunnas, Adad, Ishkur, Hadad, Thor. Such names meant nothing to it.

It continued to gather itself, sometimes hoarding its energy like a miser, sometimes expelling the excess, unmindful of the chaos it created below. This place was not its home and it had little care for any damage done to the surface. The sparks continued to evolve and change, but it had already lost interest in them.

After much time had passed it felt a ripple in its being. It became aware of a strangeness, of unnatural devices crawling on its skin, moving through its essence. It did not like this feeling, the heaviness of the stratosphere, the impurities of the troposphere. It sought the source of the intrusions and turned its attention once more to the sparks of life below.

Unchecked, the sparks had spread like an infestation across the surface. It raised the wind and rain, bleeding its own energy to cleanse the world, but it was spread too thin and could only purify one small section at a time. It tried the reverse, pulling energy instead of using it, and though the world below would shift and fracture it was never enough to deter the sparks. Always, the sparks returned.

This place was not its home, it never had been, it was never meant to be. The sparks were rendering this place impure. It was time to move on. It seethed and boiled with the energy it had achieved and reached out, away from the world below.
Posted by C R Ward at 5:02 PM