26. Let’s talk art! Do you draw your characters? Do others draw them? Pick one of your OCs and post your favorite picture of him! 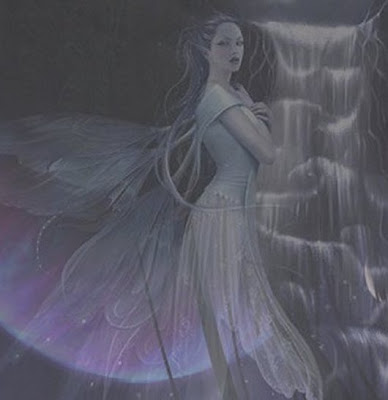 While I’ll admit that I’ve often thought about drawing my characters, my artist skills have atrophied from lack of use. I’ve never had anyone draw them for me either, but I’ve thought about that a little more seriously. The picture above is one I found and played with electronically to fit my last year’s NaNo main character.

27. Along similar lines, do appearances play a big role in your stories? Tell us about them, or if not, how you go about designing your characters.

This is a difficult question to answer. On the one hand, I know what the character looks like in my mind, but I don’t go into a lot of in depth description, leaving the reader to feel free to picture the character however they want. On the other hand, sometimes it’s necessary to describe a character in detail because their appearance is important to the story.

Take Arianna, the character in the picture. She’s a fairy, which means she’s tall and slender, and has pointed ears. And of course everyone knows fairies are beautiful, but it was necessary to describe her because my other characters didn’t know this.

Nobody’s perfect, and I try to make sure none of my characters look too perfect. Unless their very perfection is important to the plot. I’ve only had one character that this happened with – it was an early novel and the character’s species had them genetically altered to be perfect.
Posted by C R Ward at 8:00 AM

Email ThisBlogThis!Share to TwitterShare to FacebookShare to Pinterest
Labels: 30 days of questions, days 26 27

I'm a very visual writer, and how my main charactes in my WIP, Briars and Black Hellebore, look is important. Queen Hildegard, Princess Rosemarie, Prince Gunnar, and Johann the Knight all look like "perfect" examples of their looks-obsessed cultures. Queen Bellynda looks foreign, which feeds the people's suspicion and disregard for her. Family resemblances are vital to the plot, as certain characters remind people of other characters, coloring their perceptions of those characters. And also, there is magic in my story, which sometimes transforms the way people look and thus how they are treated and how they behave.

Drawing characters would be fun! Last month I did a post on "visualizing characters" using photo morphing. That's also fun but can be a giant time suck. :)