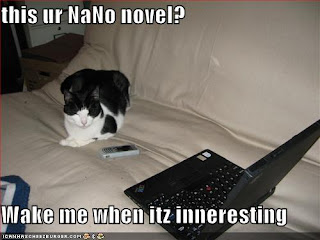 I hit a wall in my NaNo novel on the weekend. A big, fat, solid, brick wall. The more I sat here contemplating the wall, the worse it got. I was 30,000 words into my novel and I was running out of story. At least I thought I was. So then I did something stupid. I calculated how many words I was behind.

And of course then I was totally focused on the fact that I was 5,000 words behind and when will I ever have time to write 5,000 words to catch up? Argh!

Enter sanity. Sanity reminded me that I don't have to catch up all in one sitting, I have until the end of the month. And if I spread those 5,000 words out over the rest of the month it's not nearly as bad as it looks.

But there was still this big wall in my story. I'd already gone back and added a lot of detail that was pertinent to the story, and I just couldn't bring myself to add a lot of stuff to be edited out later - that seems like cheating or something.

So I took a look at the middle section of my novel and went "Hmmm." And then the hero's friend, Rafael suggested a subplot using him and the queen, not enough to seriously jeopardize the plot, but just enough to generate a possible sequel afterwards. He also suggested I could go into a lot more detail about how the heroine was put in the position of needing to be rescued and maybe some back story about why she was put in that position.

Secondary characters, you gotta love 'em. Rafael, you may have your roll in the hay with the queen. But make it last 'cause you won't get another until you two get your own book. :-)

Now excuse my while I take a mallet to that brick wall.
Posted by C R Ward at 1:17 PM

There are NO rolls in the hay in my script. However, someone may be about to die if it doesn't get interesting soon..
~Also Behind..