Yes, it's finally here! The 2010 1K Words Blogfest! If you'd like to participate, it's not too late. Go HERE to sign up.

I'm getting my offering up a little later than I'd hoped, but better late than never. :-)

First, we have the picture. If you'd like to see a larger version of it, just click on it: 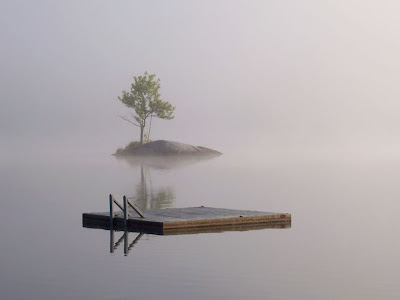 And now my words:


The morning is shrouded in mist, the lake deceptively calm. I stand on the shore watching. Waiting.

There’s not much to see, not yet anyway. I am an island in a sea of grey. I did not need clear vision to find my way to this place, but now that I am here I can see the shore of the lake and some of the water beyond.

A fish jumps, slapping the water with a splash that resounds in the stillness. I do not flinch, but continue to stand patiently. Waiting. The ripples spread out and lap quietly at the shore before all is still again.

There’s a chill in the air that has nothing to do with temperature. I ignore it.

When I was a child, my parents used to rent a cottage on this lake and we’d spend our summers here. There were several cottages near ours, everyone was friends with everyone else, that’s just the way it was.

My friends and I would swim out to the platform and then dare each other to swim to the island. We’d all make the dare, but no one would actually go. The island was forbidden. Taboo.

Some times we’d just sit on the end of the dock and fish. It wouldn’t take much, just a line with a stick cut from the woods on one end, and a hook with a worm on it on the other. The lake was full of trout and bass, perch and sunfish. At least once it had been. Who knew what it was full of now.

Back then the water was clean and clear. We’d go canoeing or sometimes out in the row boat, but never a motorboat. Motorboats were banned from this lake. Something to do with it being an ecological treasure.

At night we’d tell ghost stories around the camp fire, trying to scare each other. Sometimes we’d make up stories about the island and the lone tree growing there. We were just kids then. How were we supposed to know the monsters were real?

Perhaps if I had paid better attention to those stories we told as kids I wouldn’t be here now. I wouldn’t be alone. But if there’s one thing I’ve learned, it’s that you can’t go back and change the past. No matter how much you’d like to.

It’s drawing closer. I can feel it. The mist is beginning to draw back.

I wish I’d thought to bring a flask with me. I could use a drink. Or at the very least a cigarette. Don’t bother telling me how bad cigarettes are for me, there’s no point. It doesn’t matter any more.

They say your life is supposed to flash in front your eyes just before you die. I’ve always wondered if that was true. What would it matter if it did? You can’t change it, you probably wouldn’t enjoy it, you could only regret it, like a work of art that was left unfinished.

The mist has pulled back further. I can see the old swimming platform now, resting on the water, abandoned, forgotten. The air is tranquil, calm. The water has just a hint of a ripple to it, like the lake is trying to suppress a shiver.

I remember learning to skip stones on this lake. There’s an art to it you know. First you have to find just the right stone, not too thick and not too thin. One that’s just the right size, flat and palm sized. Hold it in your hand just so and release it with a flick of your wrist. The stone should skim over the water, touching down briefly in long, graceful arcs.

The shore of this lake is filled with good skipping stones, but I ignore them. That’s not what I’m here for.

The mist has pulled back enough that I can see the island now. Island, it’s more like a rock with a tree on it. If that tree could talk, what tales would it tell? Would it confess the secrets of this lake? Perhaps it could say what really lies beneath its roots, what lurks beneath the still, calm water.

On the far side of the lake there was wooded parking area that local teenagers used for a make-out spot. I lost my virginity over there in the back seat of an ’81 Chrysler. It was a rite of passage. Too bad it’s gone now. Gone, like everything else.

There are a lot of good memories attached to this lake. Friends and family, vacations and assignations. How can a place that was once filled with so much enjoyment have turned into such a source of . . .

With deliberate steps I start walking towards the island.
Posted by C R Ward at 10:51 PM

It's wonderful. I love the cadence of your words in this story.

Lovely story - if 'lovely' is the right word. Effortless to read. Don't do it though! Nice picture, too. Tom X.

So many questions! Male or female? Are they dying? Are they eaten up with guilt? Why is everyone else gone?... FANtastic! *enthusiastic cheering and clapping*

Wow. *shudders* That was so good. And I can appreciate the imagery, feel myself there, because I live at a lake. I can easily imagine this. Great job!

Thanks for visiting my blog, Something She Wrote. :)

Great story, I need to see where it goes, I got to know what happens next!

Wow. Sorry it took me so long to get here.

This is very powerful - the cadence, the imagery, the resigned flashes of this person's life. Excellent, profound writing.

Thank you, all! You're too kind!

You out did yourself woman...

Beautiful writing. I felt the mist in the air, the memories. All of it - just beautiful ;o)