Happy New Year! Yes, I know it’s Valentine’s Day, but it’s also the Chinese New Year, the Year of the Tiger, to be precise. 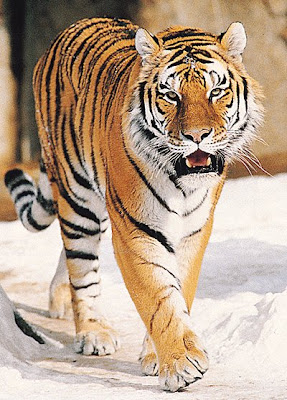 To learn what sign of the Chinese Zodiac you were born under, and a little bit about your sign, go HERE

People often wonder why the date for Chinese New Year changes each year. The Chinese calendar is a combination solar/lunar calendar, based on a number of rather complex astronomical calculations, including the longitude of the sun. Chinese New Year falls on the second new moon after the winter solstice (all months begin with a new moon).

There are many legends concerning the origins of the Chinese New Year, but this one seems to be the most widely accepted:

Legend has it that there was a beast called Nian (which means "year" in Chinese) that would come to China the night before the new year began (according to the Chinese Calendar) and prey upon the people. Nian had a very big mouth and he would swallow a great many people with every bite.

One day an old man came to the rescue of the people, he said to Nian, "I hear that you are a very capable beast, but do you think that you could swallow the other beasts of prey instead of people, who are not worthy opponents?" So Nian started to swallow he other beast which were harassing the people anyway. After that the man disappeared riding Nian. It turns out that the man was really an immortal god.

The old man told the people to put up red decorations on their windows and doors at each year's end to scare away Nian in case he came back. Nian lived in fear of the color red. The people celebrate the New Year by putting up red paper and lighting fire- crackers to scare away Nian. They say the words "Guo Nian" which mean both, "Survive the Nian" and "Celebrate the year." The word "guo" in Chinese means both observe, and pass-over.

The five-day celebration is the most important part of the Chinese celebration. No one does any cooking, except reheating, during these five days, and the shops will be closed. During the month before the celebration takes place chicken, fish, and pork are dried; eggs are preserved, and vegetables are pickled. All food preparation is done in order to be ready for the many guests who will be coming.

The first day of the five-day celebration, the day of New Year's Eve, is for visiting family and friends and bid farewell to the old year. Between 9:00 p.m. and 11:00 p.m. "incense is lit and oplaced on a table that has been arranged to meet the spirits who will decend to earth" (Hou-Tien). After 11:00 offerings are made to the gods. "The gods are asked to bring peace and prosperity." There is then a great feast as the festivities of the New Year sound on the streets throughout the night.

On New Year's Day everyone dresses in new clothes and spend the day with their families. They exchange gifts; some of these gifts are money wrapped in red and gold paper. This money is to be spent throughout the holiday. Food is kept warm all day for visiting family. The tradition is to eat dumpling soup and whoever bites into the dumpling with the surprise in it is supposed to have good luck throughout the year.

The second day of the New Year is for visiting family. Money trees are put out as a sign of prosperity.

The third day of the festival is marked with fire-crackers and the Dragon Dance. This is also the day for the beginning of the Lion Dance, which lasts through the fifth day.

The fourth day is a day for people, even strangers to drop in and visit wherever they like.

The fifth day of the New Year is for visiting family who are far away, a day of travel and reunion. On this day all of the shops re-open and people can cook again.

The Lantern Festival begins about ten days later, with the first full moon of the New Year, this lasts three days. During these three days decorated lanterns are hung and people wear white in honor of the moon and moon cakes are eaten.

The Lantern Festival comes from the time when the Chinese People would go in search of spirits with burning sticks. They thought that the spirits could be seen during a full moon.
Posted by C R Ward at 10:21 AM