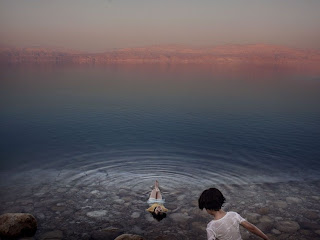 Our people had been nomads, following the herds across the hills and wastelands until we came to the edge of the sea. There we found a new way of life and gave up our wandering ways.

No longer were the tribesmen burnt brown from the sun, no longer did they have the patience to track prey through the desert. Instead they became skilled in the ways of nets and canoes. The women learned to dry fish and weave cloth from the beaten reeds of the salt marsh.

The priests, who were our teachers and also keepers of our records, warned that these changes did not find favour with the gods. But a settled people had no use for the gods, and fewer and fewer people heeded their words. With each generation, the old ways became more distant in memory.

The day that brought the judgment of the gods upon us started much like any other. The men went out in their canoes to cast their nets and the women went to the marshes to gather reeds to beat on the rocks. When the men returned, it was with little to show for their trouble. This was the fifth day the catch was not good. The priests approached Dranin, our chief, for the gods share of the catch but this time he refused to give it to them.

“Why should the gods benefit from our hard work while our families starve?” he asked. “What use are desert gods to fisherfolk?”

Seath, the priest, grew angry at this. “The gods are gods over all and must be appeased. They grow tired of your miserly ways and chase the fish away from your nets. Spurn them at your own peril.”

But Dranin would not be moved. The people were uneasy, but Dranin was chief and they were used to obeying him.

The next day there was a storm such as the people had never seen before. Wind and rain lashed at the village. The people shut themselves up in their huts and huddled together in the dark.

The damage was terrible. Several canoes were broken, the hut the dried fish was stored in was gone, the salt marsh churned up, the reeds broken and useless. Dranin ordered the women to scour the shore for what could be salvaged while he and the other men took what canoes they could find out to fish.

Fishing was always good after a storm, but when the canoes returned hours later, their nets were empty. Dranin went to where Seath awaited him on the shore.

“We have no fish remaining, what can we do to appease the gods?” he asked.

A man might have gloated at the defeat in the chief’s tone, but Seath was a priest. “The gods grow weak on their diet of fish, they need red meat.”

“And where are we to get this meat?” Dranin asked. “There is not one among us who knows the ways of the hunt?”

Seath looked at him gravely. “Then you must choose from among the people. The sacrifice must be untouched, pure of body and spirit.”

Dranin paled, but bowed his head.

My sister, Jessil was the one Chosen. She was fair and pure, and had just come into her womanhood. A feast, with what little we could gather, was given in her honour. Many gifts were given to her to take with her to the gods.

They dressed her in white and Seath gave her a potion to ease her passing. Then Dranin paddled them both so far out they were just a speck on the horizon. When the canoe returned, only Dranin and Seath were in it.

Within a day the weather cleared and the fish returned. New shoots were seen in the salt marsh, it was only a matter of time before the reeds would be fully grown again. It was declared by the priests that the sacrifice must be made each year. The Chosen one would have a year of plenty – beautiful clothes, the best of the food and drink, and many fine gifts. A great feast would be held in their honour and their name would be remembered for all time.