The Good, the Bad, and the NaNo

I validated my 50,000 words Friday night, and completed my novel on Sunday. Time for the traditional NaNo Wrap-up Post. :-) 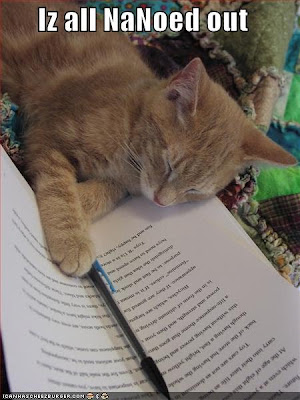 This is my third year in a row I’ve won NaNo, which means I have three novels sitting around waiting to be edited. Okay, that’s not exactly true. I’m close to having my first completed NaNo novel edited – I just set it aside for the month of November. I hope to have it ready to be submitted, or self-published, by the beginning of the New Year.

The first time I won was amazing. After years of writing (mostly poetry, short stories and articles) I had not only finished a novel, I did it in 30 days. Okay, so it needed a lot of editing, but that’s to be expected.

The second time I won was even more amazing. Not only had I finished another novel and within the 30 days, it wasn’t going to require nearly as much editing.

And then we come to this year’s NaNo.

I had my idea well in advance – I knew the characters and the story, I even knew the setting. And then at the last minute I was seduced by a shiny new idea. 12,000 words into it, I discovered that not all ideas are suited to NaNo, so after taking a day to think about it, I scrapped it and started from scratch again.

The writing using my original idea went surprisingly fast, but it was also not very good writing. Yes, I know. NaNo is all about quantity rather than quality, but still. It’s like I forgot everything I ever knew about writing. Like show, don’t tell. This story is probably 80% telling.

One thing that really surprised me, considering my preferred genres all contain romance, if not erotica, is that there is no sex in this novel. None. I tried to encourage my two main characters to have sex – even set them up to have sex – but all the good stuff happened behind closed doors and we’re not really sure if it really happened at all. Seriously!

So. Does this mean I’ll be scrapping this story? Not at all. While the execution leaves much to be desired, the story itself is pretty good. Granted I’m really not looking forward to editing it – I’ll probably just use it as a really detailed outline – but it’s the beginning of a potential series and has a lot of important stuff going on.

So all in all, I’d have to declare this year’s NaNo to be a success. How about you? How did your NaNo go?
Posted by C R Ward at 8:00 AM

Email ThisBlogThis!Share to TwitterShare to FacebookShare to Pinterest
Labels: NaNo, wrap up

Congratulations! That's so exciting to have another full book under your belt. Good luck finishing up the editing of your first one!

Congratulations. I think I will know how my NaNo went after the whole draft is finished. But lots of editing required, no question.

Ah!!! at last I found what I was looking for. Somtimes it takes so much effort to find even tiny useful piece of information.

Well done, and I'm sure you'll clean it up nicely later on. You did what I should have done, which is just keep writing, so much kudos for that.

I cannot wait to have your finished work on my shelves. ;-)

I just added your web page to my favorites. I like reading your posts. Thanks!