Behind the Headlines Blogfest

You know what the hardest part of this blogfest was? Finding a headline that “spoke” to me. I read a couple of newspapers, then I checked some on-line sources. When I saw the story about a 7-year-old girl who was sold by her 15-year-old sister so she could be gang-raped, I was ready to give up. It’s stories like these that are the reason I gave up subscribing to newspapers in the first place.

Then I remembered that I’m a pack rat, and among the detritus lining my nest are several file folders filled with interesting tidbits that piqued my interest over the years, mostly culled from newspapers. Even so I still had to dig pretty deep to find a suitable headline.

I have no idea how old this headline is, but I do know it came from the Toronto Star. And just so you don’t think I cheated and made it up, I even scanned it for you. :-) 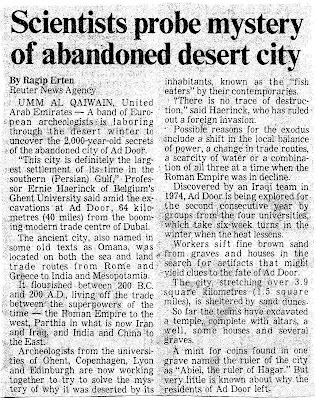 I know Ralfast gave us an entire week for the Behind the Headlines Blogfest, but I honestly planned to have my post up before this. Unfortunately it was a really busy week this past week and I found myself dropping more balls than the beginners class in a juggling school.

Anyway, for better or for worse, here’s my offering:

My name is Abdel malik and I am chief scribe to the Exalted Abiel, ruler of the shining city of Omana. It is my lord’s command that I set down an account of our last days, and the events that brought us to this sorry pass.

It began with a woman, as do all tales of woe. She came from the land of the Pharaohs, this witch who called herself Nehphys. There were whispers that she was cast out and cursed by her own people, but the Mighty Abiel would hear no word against her, so fair was she of face and form.

For a handful of days, all was well. The marketplace flourished, the trade caravans came and went as usual. The fishing boats went out and returned with large catches of fish. All was peaceful within the city, save for the absence of our king, who was sequestered deep in the bowels of his palace with Nehphys.

The palace slaves being sent to the market became fewer and fewer. Then rumours began of unclean arts practiced within the palace, offerings made to dark, nameless gods. Unrest began to grow, angry mutterings in the souk. A delegation of priests were sent to have speech with his Eminence, Abiel.

They were kept waiting for hours, a thing unheard of, even in Omana. It was only through great exertion of will they were admitted into our great king’s presence and even so they were allowed no speech with him in private for he could not bear to be parted from Nehphys for even a short time.

The tale they returned with was most disturbing. While Nehphys flourished, her golden skin glowing and her silken black hair shining, the king appeared somewhat . . . diminished. Her voice was a sinuous whisper in the king’s ear and the king parroted that which she advised him. The priests left, the voice of the people unheard.

It was soon after this the fishermen began to return with boats that were no longer full with their catch. Not only were there fewer fish in their nets, what fish they caught were small and unwholesome to look upon. The priests made many sacrifices and received only ill omens for their trouble.

The seas rose up, destroying the trading fleet. One hundred and twenty-seven men lost, as well as their ships and all the cargo. A wasting illness spread throughout the lower city, soon there was not one home left untouched by death.

Our storehouses were rapidly depleting. Even so, words of a curse were but whispered, and then only in the darkest corners. Dread and unrest filled the hearts of the people.

Izz-al-din, high priest and one time friend of the Illustrious Abiel, took it upon himself to seek an audience with the king on behalf of the people. His intent was to urge the king to send the witch away. He was never seen again, nor was it ever learned what became of him.

A season of storms began. Many rich caravans were lost to the sand. More death. The great cities abandoned us to our wretchedness, no longer did their goods pass through our wondrous city. A new trade route was found, one that did not include us.

The final straw was when the wells offered nothing but thick mud. In fear and anguish, the populace rose up and stormed the palace, intending to rid our city of Nehphys and her curse, once and for all. They found the Great Abiel, a phantom of his former self; of the witch there was no trace.

In the end we were forced to abandon our beloved city. Only the gods know what will become of us. The Great and Powerful Abiel has fallen, and taken our beloved Omana with him.
Posted by C R Ward at 1:28 AM

I love your analogy :-) of a beginner juggler.

The bewitching love of a woman.